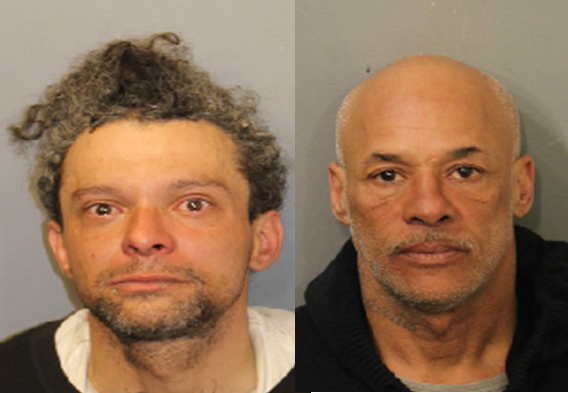 According to Detective John Robinson, on Wednesday, March 18th, at approximately 8:45 p.m., Fall River Police Officers Marc Correia, Tyler Andrade, and Christopher Teves were dispatched to the former Al’s Variety on Fourth Street in response to a neighbor’s report of two men breaking into the store and removing clothing from the store in a trash barrel. The anonymous neighbor described the two men as wearing all black. One of the males was wearing white shoes.

On arrival, Officer Andrade observed two men, Christopher Holmes, 39, of New Bedford and Hiram Suarez, 43, of Fall River, in all black clothing walking away from the store towards Morgan Street. When Andrade called out to Holmes and Suarez to stop, they continued walking away, turning onto Morgan Street. Officer Andrade and Teves pursued the men, caught up to them, and detained them. While Teves stood by with the suspects, Officer Andrade retrieved the trash barrel and observed the children’s clothing inside with tags on them just as the anonymous neighbor described.

When Officers David St. Laurent and Holly Brett arrived to assist, one of the detainees was placed inside their cruiser. The detainee had a fresh cut on his hand that was still bleeding. The other detainee was placed into Officer Correia’s cruiser.

Examination of the store revealed broken glass on a door leading to the children’s clothing storage area. The clothing was valued at over $1000.

Holmes and Suarez were placed under arrest on charges of Breaking and Entering in the Night to Commit a Felony and Larceny from a Building.