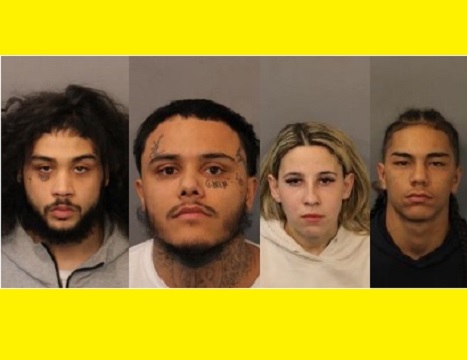 Three have been arrested and another is wanted concerning two city shootings and a crash into a business that took place recently in Fall River.

According to Sergeant Moses Pereira, at approximately 2:45 p.m. on Friday, officers responded to the area of Locust and Linden Streets after receiving reports of shots fired.

Once on scene, investigators located several spent shell casings in the immediate area. No injuries were reported as a result of the incident. It was reported that several men had engaged in a verbal altercation moments before the shots were fired.

Just after 10:15 p.m. on Sunday, officers were dispatched to Chaves Market, regarding reports of shots fired in the area. While in-route, responding units were advised that a vehicle had crashed into the business, and its occupants had fled the area.

Upon arrival, officers located the unoccupied vehicle and were unable to locate any of its occupants.

It was later confirmed by investigators that a shooting occurred in this area as well.

Also arrested in connection with the Chaves Market incident were 25-year-old Brendon Bindig, and 26-year-old Savannah Soares both of Fall River. Both were charged with witness intimidation.

Soares was one of seventeen individuals arrested in a joint narcotics operation, conducted with the Massachusetts State Police on November 2.

Anyone with information regarding his whereabouts is asked to contact the Fall River Police Department at 508-676-8511. Anonymous tips can be provided by dialing 508-672-TIPS (8477).