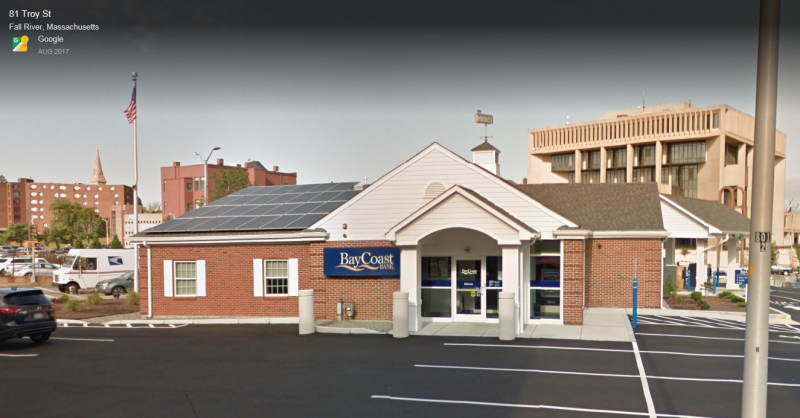 A 19-year-old Fall River man has been sentenced to serve two to four years in state prison for his role in organizing the unarmed robbery of a bank and assaulting a police officer, Bristol County District Attorney Thomas M. Quinn III announced.

Gabriel Burgos pleaded guilty in Fall River Superior Court this week to a two count indictment charging him with unarmed robbery and assault and battery on a police officer.

On Wednesday, February 20, 2019, at approximately 3:45 p.m., Burgos, acting as part of a joint venture, robbed BayCoast Bank located at 81 Troy Street in the city of Fall River. The defendant organized the plan, selected the bank, and acted as the get-away driver. The defendant worked in connection with both a 14 and 15 year old juvenile female.

The defendant had picked up the juveniles from a friend’s house in a dark colored car. Prior to being picked up, the 14 year old told her 15 year old friend that the defendant wanted to rob a bank. When the older female entered the car, the defendant told her of the plan to rob a bank. She obliged in order to stay with her younger friend. The defendant first drove the juveniles to a different bank in Fall River. He handed the younger female a note and told her to go into the bank and hand a teller the note. The females entered the bank but turned around without robbing it. The defendant became upset and then drove the juveniles to the bank he selected as a backup, BayCoast Bank on Troy Street. Burgos instructed the older female to remain inside the car. He sent the younger juvenile inside the bank with the note and told her to run to the vehicle after the robbery. She entered the bank and handed the note demanding money and threatening violence to a teller. The teller handed her the money. The juvenile fled the bank and the teller called 911.

After the robbery, the younger female handed Burgos the money and he then drove them all to his home located at 372 Mulberry Street.

Police obtained surveillance video that showed both females run to and enter a black Toyota Camry found to be registered to the defendant’s mother at 372 Mulberry Street. Police proceeded to that address and observed the vehicle parked in the driveway behind the home. Inside the first floor apartment, police located the defendant and his parents and were let into the basement apartment by his father. In the basement, police located both juvenile females. The defendant was arrested and placed into the back of a cruiser. The defendant asked to speak to an officer, and when approached, began punching and kicking the officer. Two officers were needed to get him under control.

Inside the defendant’s bedroom, police located two notebooks. In one of the notebooks, there was a torn perforation that aligned with the robbery note along with indentations of the words from the robbery note on the next sheet of notebook paper.

“It is very sad that a 14 and 15 year old were plotting with an 18 year old to commit armed robberies,” District Attorney Quinn said.