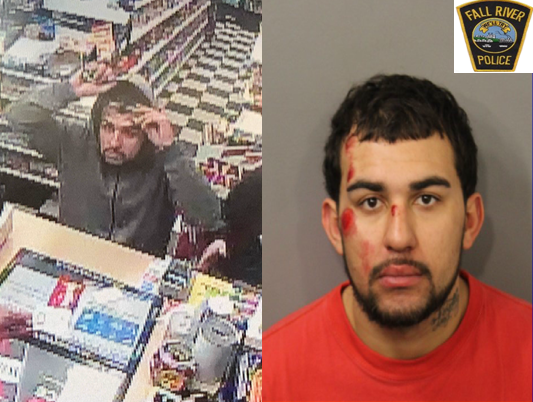 According to Fall River Police, on Thursday, January 17th, 2019, at approximately 6:00 am Fall River Police Department Uniform Division Officers Joseph Boyajian and Andre DeMelo, David St. Laurent, and Brendan McNerney were dispatched to the area of 429 East Main Street in response to a report of a male bleeding in the street.

On arrival in the area, Officers observed Brent Prescott, 24, bleeding from the face and hand. While treating Prescott for his injuries, officers were told by Prescott that he was involved in a drug deal gone wrong. An ambulance arrived and transported Prescott to a local hospital.

The 60-year-old victim stated a male ran up behind her, grabbed her purse while cutting her hand with a knife and knocking her into the street. The knife was located and taken as evidence. Surveillance photos were obtained and circulated among officers. Detective Lawrence Ferreira was able to identify the male as Prescott and as a result of that identification Prescott is also charged with: