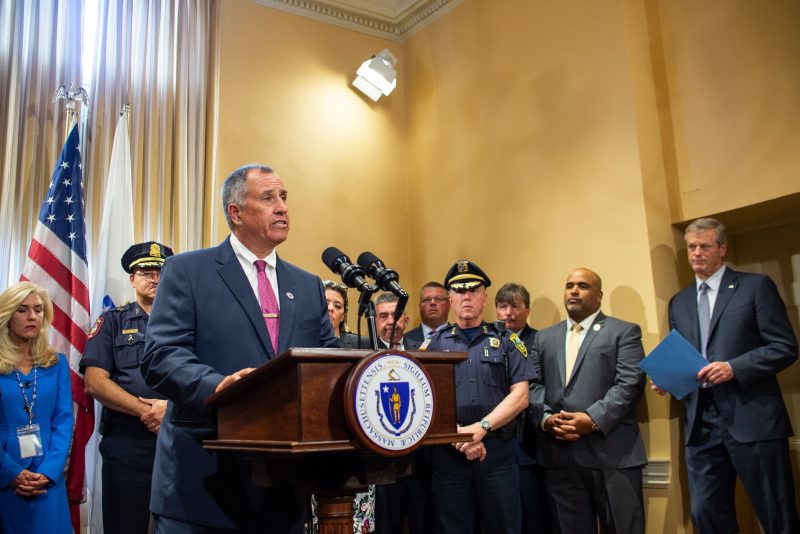 During a press conference held at White’s of Westport this morning, DA Quinn unveiled a new website that will routinely update the public about the violent fugitives still on the loose in the community. In conjunction with this website, DA Quinn also announced a new anonymous tip program designed specifically to give the general public the opportunity to assist in locating and apprehending these fugitives from justice.

The Bristol County Most Wanted Fugitives webpage, which can be found on both Facebook at www.facebook.com/bristoldafugitives and via a website www.bristolda.com/fugitives will be updated regularly and will highlight specific fugitives from justice. The list of fugitives will include information about the criminal cases, information about the defendant’s ties to the community and any other connections to the area. The webpage will also include information on how to provide an anonymous tip to assist us in locating and apprehending these fugitives.

Members of the public will be able to either anonymously send in a tip via text message or anonymously submit a tip via the web at https://new.tipsubmit.com/en/create-report/anonymous/da.bristol.ma.us . To text in a tip, all a citizen has to do is text the keyword “Bristol” to the phone number CRIMES (274637). After typing in the word “Bristol,” the citizen can then type in the tip they want to provide. The text will be received by a member of our state police unit and the state trooper will have the ability to respond to the text to seek more information or get a clarification about the tip. No state trooper or anyone from our office will have access to the tipster’s actual phone number because when the tip is sent by the citizen it is first routed to Canada and then assigned a random non-existent phone number. This assures complete anonymity for the tipster.

Since internally beginning this initiative in August, they have already located and captured 10 fugitives who defaulted on serious Superior Court cases.

“Massachusetts is drowning in hundreds of thousands of open warrants. While many of the cases involve minor offenses, there are, however, many violent and serious offenders with open arrest and default warrants who are walking the streets of our communities every day. This has been an issue I have taken very seriously during my 20 year career as a prosecutor. While we have aggressively tracked down fugitives during my tenure as the district attorney and first assistant district attorney, this initiative will bring added attention and resources to this important public safety issue,” District Attorney Quinn said. “With the public’s assistance and the media shining its spotlight on this growing problem, it is our hope that we can track down violent offenders who skip court and never show up to face the charges. The message here today should be clear: You simply will not get a pass when you skip court and try to evade prosecution.”

While at the press conference, DA Quinn stated the they have identified a suspect and are actively pursuing him in response to the Wednesday night stabbing death of 17 year old William Wheeler in Fall River.