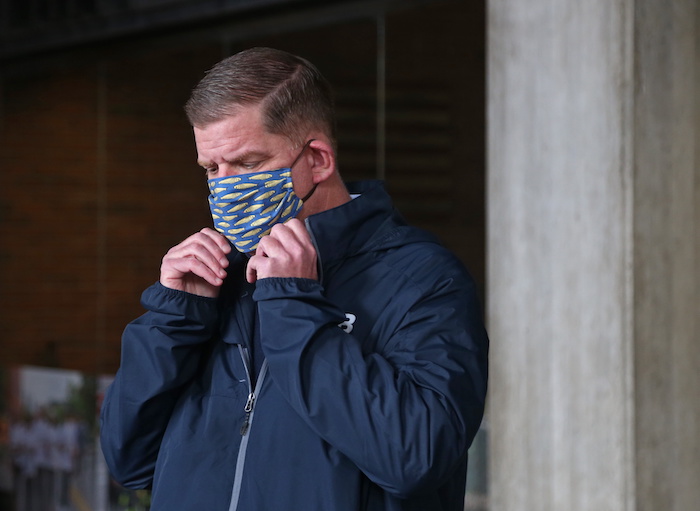 Walsh, a House lawmaker for 17 years before taking the top job in Boston City Hall in 2014, also served as secretary/treasurer of the Boston Building Trades and had been discussed as a leading contender for the labor job. Biden’s office did not formally announce the pick and Politico sourced the news to four separate unnamed people.

The Dorchester Democrat has had a close relationship with Biden for years. When Walsh first won the mayoralty in 2013, then-Vice President Biden from the White House called the wrong Marty Walsh to offer congratulations, instead connecting with a former Sen. Edward Kennedy aide and consultant by the same name. More recently, Walsh introduced Biden in April 2019 when he spoke from the back of a Teamsters Local 25 flatbed in the South Bay Center parking lot in Dorchester to support striking Stop & Shop workers.

“Mayor Walsh is a close friend and an incredible public servant,” Biden said in a statement before he presided over Walsh’s second inauguration in January 2018.

Gov. Charlie Baker said Thursday afternoon that he talks with Walsh almost daily but had not spoken to him about becoming labor secretary.

“We obviously have had, for the past six years now, a really positive collaborative working relationship with Mayor Walsh and his team on many, many issues,” Baker said. “Our ability to work together has made a big difference for the city and the surrounding environs. And I consider him somebody who I can be very straight with on pretty much anything we talk about.”

“I am thrilled to hear that Mayor Marty Walsh has been chosen for our new Labor Secretary. Throughout his career he has been a champion for worker’s rights and I am confident that he will succeed in this new position in the Biden Administration,” Neal said.

Sen. Ed Markey tweeted: “Fantastic news. As a union leader, @marty_walsh will bring the commitment to workers and working families that is desperately needed right now. His tremendous leadership in Boston on climate action, health care, and social justice make him ready on day 1.”

If Walsh does resign to become labor secretary, Boston City Council President Kim Janey would be elevated to acting mayor, making her the first woman of color to lead the city. She would also have an incumbency advantage if she opts to enter the 2021 mayoral election, shaking up a field that so far includes city councilors Michelle Wu and Andrea Campbell.

“Congratulations to Mayor Marty Walsh on his nomination as Labor Secretary for the Biden Administration. He will be the first union member to serve in this role in nearly 50 years, and his leadership will come at a critical time for the labor movement,” Wu said.

In September, Walsh got a bit ahead of Wu’s official mayoral campaign announcement when he told the Boston Globe that Wu had called him to say she would be running in 2021. “There is much work to do to clean up the backwards, anti-worker policies of the Trump administration that have hurt so many here in our city, and Boston needs a partner to fight for working families at the federal level.”

When President Bill Clinton reached into Boston City Hall to appoint Mayor Ray Flynn ambassador to the Vatican in 1993, City Council President Thomas Menino became acting mayor, a post he would use as a springboard to the next two decades that would make him the city’s longest-serving mayor.

In a related story, President-elect Biden has reportedly asked RI Governor Raimondo to become commerce secretary, according to the New York Times.