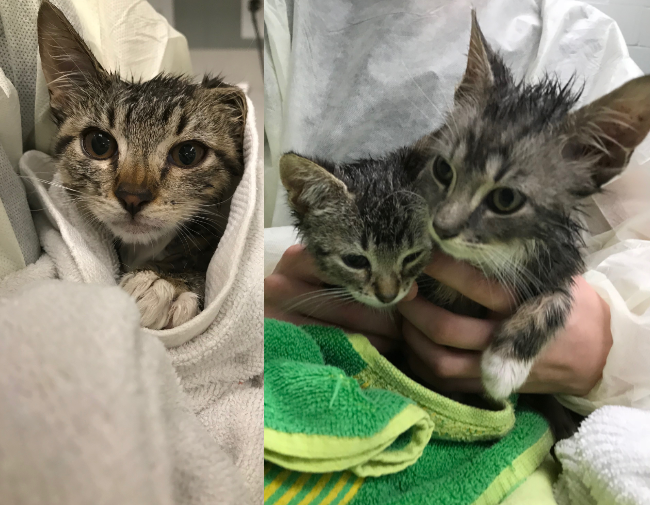 Courtesy of the MSPCA

The home, located at 1318 Slade Street, has been condemned. MSPCA Law Enforcement Officer Chelsea Weiand responded on July 20th to a hoarding complaint, and upon seeing the severity of the situation, contacted Fall River officials to further assess the conditions and facilitate removal of the animals from the home.

The Fall River police department is expected to file felony animal cruelty charges against the animals’ owner, while the MSPCA will house and treat the animals before they can be placed into homes.

All of the cats—six adults and four kittens—are infested with lice, which is extremely contagious and necessitates isolation from other cats for the next several weeks. The cats are also underweight and have serious ear, eye and respiratory infections. Several of the adult cats will also require significant dental work.

The rabbit, a male white and black “Hotot” breed, remains at a nearby veterinary hospital where veterinarians are working to determine the cause of his deformed front legs—and his prognosis. His legs may have atrophied due to extreme confinement, as the rabbit was kept in a small cage for most of his life.

Mary Sarah Fairweather, director of the MSPCA-Cape Cod, was shocked at the animals’ appearance. “We’ve taken in animals from hoarding houses in the past and they’re always very scared and sometimes in ill health—but these animals are as sick and dirty as any we have seen recently,” she said.

Some of the cats were confined to cages while others roamed inside and outside of the house. Several dead animals were found inside the home and the stench rendered the home uninhabitable.

The cats have received topical treatments and will receive weekly baths to treat the lice. They have also been placed on antibiotics to address their eye and ear infections. Fairweather expects all of the animals to recover and be placed for adoption.

“The cats are starting to feel much better now that they’re getting treatment for their eyes and ears—along with nutritious food and clean water,” said Fairweather. “It’s incredibly gratifying to our staff and volunteers to help them grow healthier by the day.”

Fairweather reports that the cats, who upon arrival were scared stiff in the backs of their cages, are now incredibly friendly and outgoing. “They are some of the friendliest cats we’ve ever housed. They love to head butt each other and our staff and volunteers—they’re going to make wonderful pets.”

Potential adopters are encouraged to email capeadoptions@mspca.org for more information about the animals or visit them in person during open hours at the MSPCA-Cape Cod in Centerville.