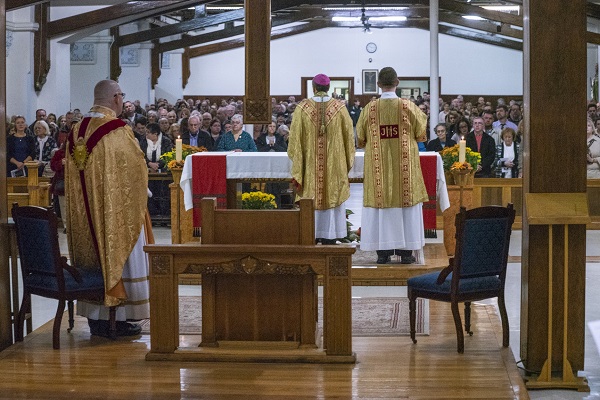 FALL RIVER – At least 250 people packed one last time today into the basement shrine to worship at St. Anne’s Church.

The final Mass at the iconic 112-year-old Catholic church building on South Main Street was an emotional gathering, with dozens of people in the pews openly weeping as the Rev. David Deston, the parochial administrator, bid them all goodbye.

“I’m already falling apart,” Deston said in between tears at the end of the nearly two-hour-long Mass, which featured hymns in Latin sung by a full choir in red robes, the lingering aroma of incense and several concelebrating priests.

Bishop Edgar da Cunha of Fall River, who made the final decision to close St. Anne’s, presided over the closing Mass. 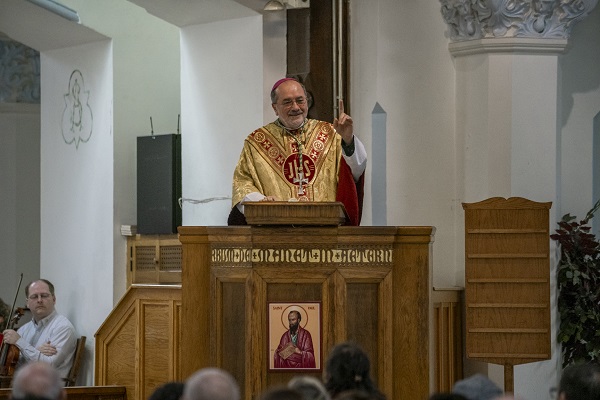 “Our faith is not grounded on a building or on people. Our faith is grounded in Jesus Christ,” Da Cunha said in his homily.

The bishop paid homage to the French-Canadian immigrants who built the church with their own resources and labor many decades ago. The bishop also spoke of the difficulty of change, and tried to reassure parishioners that their church had not abandoned them.

Last month, the Diocese of Fall River notified parishioners that St. Anne’s would be closed after the Mass on Nov. 25, the Feast of Christ the King, which closes out the Catholic Church’s liturgical year.

In a letter addressed to parishioners, da Cunha had cited decreasing Mass attendance, deteriorating finances, a priest shortage and the costs of fixing St. Anne’s as factors that went into his decision.

An architect estimated it would cost $13.5 million to fully renovate and repair St. Anne’s. Parishioners said it would cost about $5 million to reopen the upper church, which had been closed since a piece of plaster fell off a wall during Mass in May 2015. 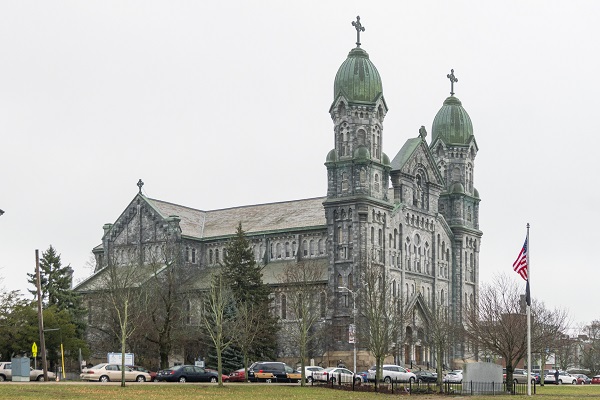 “I can’t believe they let it go like this,” John Raposo, a stonemason, said as he surveyed water damage that caused one of the basement shrine’s Stations of the Cross panels to be removed from the wall.

Raposo traveled to Fall River from his home in Cranston, Rhode Island to see St. Anne’s for the final time.

Sheila Veiti, a Cranston resident who accompanied Raposo, said she also came to Fall River to pay her respects.

“I was very emotional,” Veiti said. “I had to be here because it’s such a beautiful church, and there’s so much history here. I feel so bad for the parishioners.” 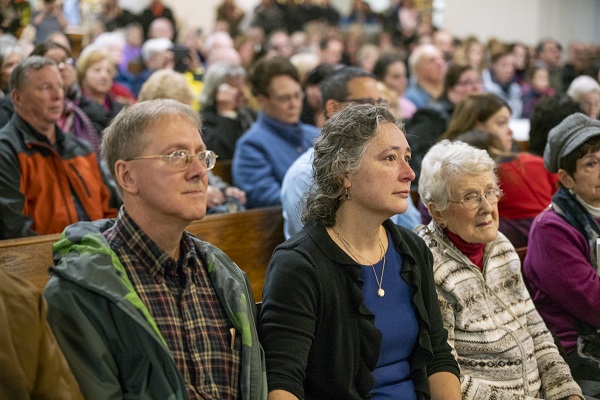 In a last-ditch effort to save their church, some parishioners have formed the St. Anne’s Preservation Society. Two weeks ago, the group filed a formal appeal to ask da Cunha to reconsider his decision. A consultant advising the group said during a public meeting earlier this month that the society is drafting a proposal to convert the church into a shrine. The proposal would also detail fundraising plans to reopen the upper church and renovate the entire building.

“If there is a viable plan, we are open to it. My hope is to find a good use for this building, whatever that may be,” da Cunha said, adding that he had not yet seen a detailed proposal from the parishioners.

Da Cunha said he hopes the heart-broken parishioners of St. Anne’s will find new spiritual homes in the other parish churches throughout Fall River.

“They need time to heal their wounds, but we have the priests here, we have the diocese working with them,” da Cunha said. “My hope is that all the people connected to St. Anne’s will find connections to another church.”

After Mass, dozens of parishioners walked around the basement shrine for the final time, taking pictures of the many saint statues, side chapels, votive candles and the statue of St. Anne with a young Blessed Virgin Mary where countless miracles and physical healings reportedly occurred through the centuries.

“It’s beautiful and heartbreaking at the same time,” said Michelle Farias of Fall River, who attended St. Anne’s School when she was young.

James Harrington, a St. Anne’s parishioner, had tears in his eyes as he recalled growing up in the neighborhood and serving as an altar boy when he was in the third grade.

“It’s tough, but I think we have to face realities now,” Harrington said. “It’s my hope that it can be put to some use for the city, maybe as a performing arts center. I just think this building should be preserved for the city of Fall River.”