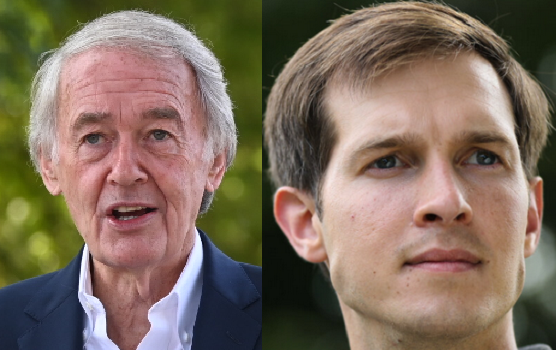 While Democratic Massachusetts lawmakers are pleased with the likely passage of the American Rescue Plan, they don’t plan on stopping there.

Congressman Jake Auchincloss (D, MA-04), speaking on MSNBC Sunday morning, expressed that he likes the pandemic relief bill that is headed back to the House of Representatives and feels that it will put the country over the hump.

know some [Republicans] want to do what’s right by their constituents but I can’t speak to how they’ll vote on this. What I know is we’re going to pass this in the House because it’s what the American people want, it’s what they need, it’s what they were promised, and it’s what is required to get us to the other side of the pandemic…We are going to get enough vaccines for every American by May and by Independence Day, I think this country is going to loosen the shackles of this pandemic.”

Senator Edward J. Markey (D-Mass.) in a statement vocalized his thoughts that the package is much needed for American families.

“Despite unanimous Republican opposition, [Saturday] Democrats delivered on our promise to the American people with a much-needed and long-overdue $1.9 trillion coronavirus relief package. The American Rescue Plan is a life raft for millions of families, small business owners, and essential workers and will help prevent a disastrous wave of foreclosures, hunger, unemployment, and death because of this pandemic.”

Republicans have argued that while some of the bill helps the average American citizen, much of the legislation is filled with “pork”. According to Politifact, contained in the revamped Senate bill is $270 million, split between the National Endowment for the Humanities and the National Endowment for the Arts, $200 million to the Institute of Museum and Library Services, and $50 million to environmental issues in minority and low-income neighborhoods. In addition, $50 million is headed to family planning, some of which could go toward Planned Parenthood.

The following is also in the bill, according to Markey.

• $300 a week in unemployment insurance benefits, extended through September 6.
• Tax relief to workers who received unemployment insurance compensation by making the first $10,200 of unemployment insurance benefits non-taxable.
• $1,400 direct cash payment per adult and an additional $1,400 per dependent for low- and moderate-income households, phasing out for individual incomes between $75,000 and $80,000 and couples between $150,000 and $160,000
• $50 billion for testing, genomic sequencing of variants, and contact tracing efforts, as well as manufacturing and procurement of PPE
• $20 billion for improving vaccine administration and distribution
• $10 billion for the Defense Production Act to procure essential PPE and other medical equipment
• $25.2 billion investment in underserved communities and communities of color to address racial and ethnic disparities and promote health equity
• $350 billion for states, localities, Tribal nations, and U.S. territories
• $20 billion in emergency rental assistance and $4.5 billion for the Low Income Home Energy Assistance Program (LIHEAP)
• $25 billion in a new Restaurant Revitalization Fund, which will provide grants to help local restaurants keep their doors open and workers employed
• $170 billion to help K-12 schools and institutions of higher education reopen safely for in-person learning and address students’ needs
• $1 billion for emergency assistance for children, families, and workers through the Temporary Assistance for Needy Families program
• Extension of the 15% benefit increase in the Supplemental Nutrition Assistance Program (SNAP) through the end of September
• An increase in the Child Tax Credit from $2,000 to $3,000 for children between 6 and 16. The agreement also creates a $3,600 tax credit for eligible children below the age of 6 and allows children who are 17 years old, and typically ineligible for the tax credit, to benefit for 2021.

While both Auchincloss and Markey agree with the passage of the relief bill, they feel more has to be done involving low-wage jobs which were removed from the Senate proposal.

Auchincloss – “I supported the Raise the Wage Act; I absolutely want leadership to bring it back on the floor for another vote in the House and in the Senate…I’m a believer in raising the minimum wage – we clearly have work to do to get the necessary support. What we saw in the Senate is one example of why I’m an advocate of getting rid of the filibuster – because Democrats have the majority right now, we’re trying to deliver on a popular policy for Americans and it’s being held up…I’ve got every confidence we can pay people $15 dollars an hour and still have a thriving entrepreneurial business ecosystem…

What we’ve seen over the last 25 years is essentially a barbell economy in which there’s a huge pool of service workers who are struggling to get by and on the other end knowledge economy professionals who are doing exceptionally well. And we’ve got to rebuild that middle class, we’ve got to turn that barbell into a more evenly distributed fair economy. And the minimum wage helps do that, especially for the service workers.”

Markey says that Senate Democrats will push until a $15 minimum wage is passed and also feels more payments are necessary than just what is in the American Rescue Plan.

“Our direct cash assistance shouldn’t be limited to just this latest payment. We need recurring payments and to expand the number of Americans who are able to obtain this tangible relief. And we will not stop until we pass at least a $15 federal minimum wage, and that includes abolishing the filibuster to ensure we give our workers a raise.”

The Pandemic Relief Bill could pass as early as this week with payments sent to Americans by the end of the month.