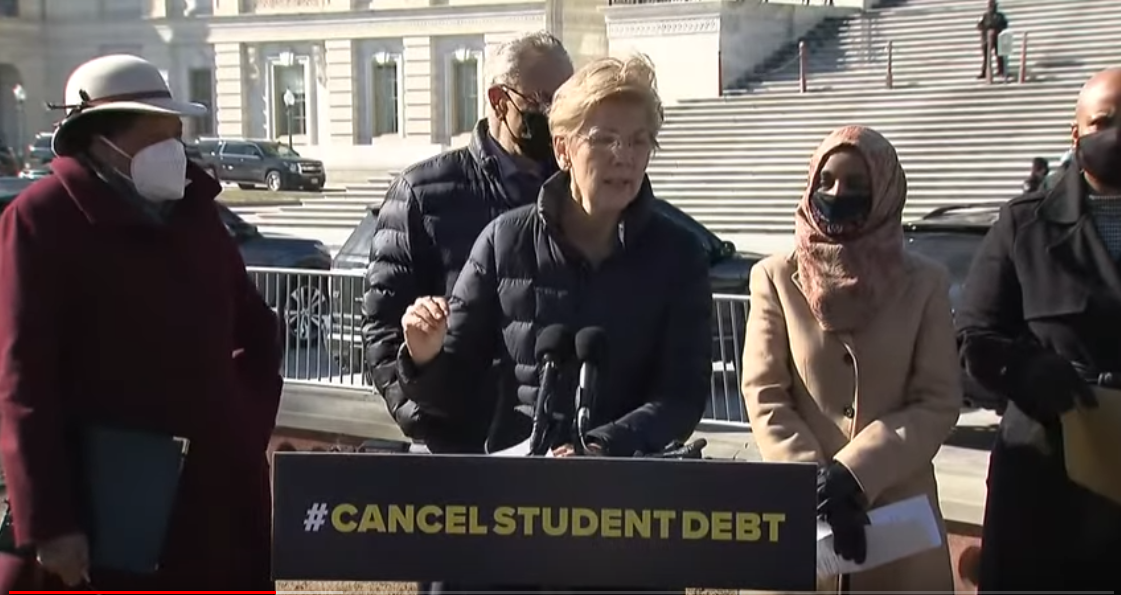 Washington, D.C. – United States Senator Elizabeth Warren (D-Mass.) and Senate Majority Leader Chuck Schumer (D-N.Y.), and Congresswoman Ayanna Pressley (D-Mass.) led their colleagues in reintroducing their resolution outlining a plan for President Biden to use existing authority under the Higher Education Act to cancel up to $50,000 in student loan debt for Federal student loan borrowers. The resolution calls on the President to use executive authority to cancel student loan debt and ensure there is no tax liability for Federal student loan borrowers resulting from administrative debt cancellation.

According to a statement released by the group, over 43 million people in the United States combine for $1.6 trillion in federal student loan debt.

“The COVID-19 crisis is worsening the massive inequities in our economy and society, but even before the pandemic the student loan debt crisis was already crushing millions of Americans,” said Senator Warren. “By cancelling up to $50,000 in federal student loan debt for borrowers, President Biden can take the single most effective executive action available to provide a massive stimulus to our economy, help narrow the racial wealth gap, and lift this impossible burden off of tens of millions of families.”

“Student loan debt is weighing down millions of families in New York and across this country,” said Leader Schumer. “During a time of historic and overlapping crises, which are disproportionately impacting communities of color, we must do everything in our power to deliver real relief to the American people, lift up our struggling economy and close the racial wealth gap. Democrats are committed to big, bold action, and this resolution to cancel up to $50,000 in federal student loan debt is one of the strongest steps the president can take to achieve these goals.”

“The student debt crisis is a racial and economic justice issue,” said Congresswoman Pressley. “With this pandemic worsening daily, we need bold and high impact policies that will match the scale and scope of the crisis and truly offer immediate relief for people-this must include across the board student debt cancellation. President Biden has the legal authority to cancel billions in student debt with the stroke of a pen and he must meet the moment by using that authority, which would not only set us on a path to an equitable recovery, but would also help reduce the racial wealth gap.”

Congress has already granted the Secretary of Education the legal authority to broadly cancel student debt under section 432(a) of the Higher Education Act of 1965 (20 U.S.C. 1082(a)), which gives the Secretary the authority to modify, “… compromise, waive, or release any right, title, claim, lien, or demand, however acquired, including any equity or any right of redemption.” The Department of Education has used this authority to implement relief for federal student loan borrowers during the COVID-19 pandemic.