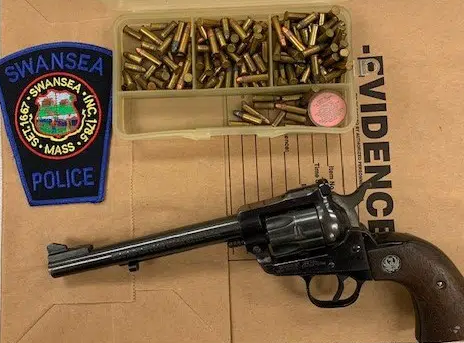 On Tuesday, at approximately 4:49 p.m., Swansea Police Officers Andrew Pelletier, Jonathan Furtado and Ashley Motta were dispatched to Walmart, located at 54 Cousineau Drive, for a report of a shoplifting incident involving two individuals.

A store employee informed the officers that the suspects — later identified as 33-year-old Amanda Dunse, of Assonet and 30-year-old Nicolas Texeira, of Cranston — allegedly returned merchandise using an old receipt. Following the return, loss prevention employees at the store told police that they determined that the transaction was a fraudulent return.

Officers learned that Dunse and Texeira fled the store to a waiting vehicle. Upon arrival, officers located the vehicle with Dunse, Texeira, and 38-year-old Daniel Harden, of Brockton, inside. A number of receipts from other stores, a firearm and ammunition were located in the vehicle.

All three suspects are known to police and were wanted on active arrest warrants from other communities.

Texeira was arrested and charged with Conspiracy and False Creation or Use of a Sales Receipt.

Dunse was also arrested and charged with Conspiracy and False Creation or Use of a Sales Receipt.

Harden was arrested and charged with Conspiracy, Possession of Ammunition without FID Card, Carrying a Firearm without License, and Receive Stolen Property Less Than $1,200.

Texeira was released on bail and Dunse is being held on bail. Harden is being held without bail. The suspects were expected to be arraigned in Fall River District Court on Wednesday.