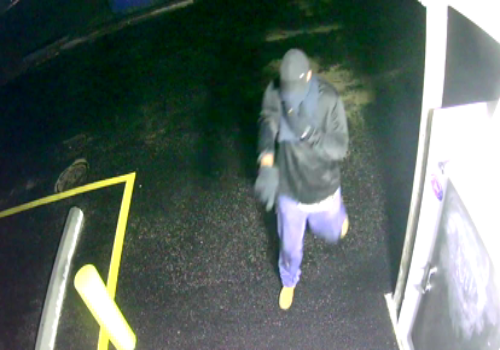 Westport Police are looking for an armed robbery suspect from last night.

According to Detective Robert Rebello, at approximately 10:12 p.m., the Westport Police Department responded to Westport Market, located at 291 American Legion Highway, for a report of an armed robbery. The store clerk reported that a male had robbed him at gunpoint outside of the store. After the armed robbery, the suspect then fled the scene on foot headed west on American Legion Highway. Upon arrival, officers were unable to locate the suspect after canvassing the area. The victim told officers the suspect threatened to kill him if he did not give him what he wanted. The suspect took an undisclosed amount of cash from the victim along with his cell phone and additional personal items.

The victim’s statement, along with observations made while reviewing the surveillance video, have provided the following description of the suspect. The suspect is a light skinned male, approximately 5’10” wearing baggy blue jeans, dark hoodie, dark baseball hat with small white emblems on the front and back and black gloves. The suspect covered his face while he robbed the victim.

Westport Police strongly urge citizens to not approach an individual they think may match the description as he is considered armed and dangerous.