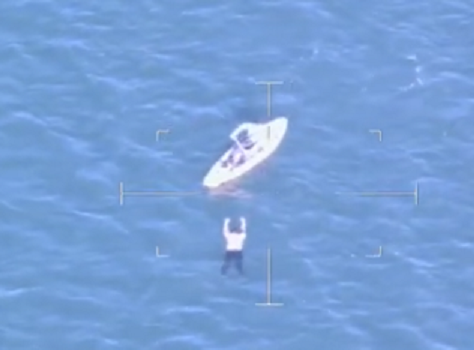 At approximately 12:40 p.m. Friday, Massachusetts State Police Troop H Headquarters was notified that a woman had entered the ocean off Wollaston Beach in Quincy and appeared to be in distress about 100 yards off shore, being swept by the current. MSP Troopers and Quincy Police Officers responded, as did Quincy firefighters. State Police Marine Unit boat Marine 15 also began responding to the location.

Trooper Michael Bucca of the Troop H Community Action Team located an abandoned kayak and paddled out to the woman, who appeared to be drowning. Trooper Bucca reached the woman and kept hold of her as MSP Marine 15, with Troopers Vernon Hubbard and Matthew Braga aboard, navigated alongside. As Trooper Hubbard piloted the boat, Trooper Braga pulled Trooper Bucca aboard, and Troopers Braga and Bucca immediately pulled the woman aboard and began CPR. Initial indications were that the CPR was successful and the woman was breathing.
MSP Marine 15, with the woman aboard, rushed to the Wollaston Yacht Club , where an ambulance was waiting. The woman was transported by ambulance to Boston Medical Center where she is in critical condition.

Further investigation by State Police, based on witness statements, revealed that she removed all her clothing and entered the water from the beach. The kayak utilized to by Trooper Bucca to help rescue her, was appropriated from an off-duty Quincy Police Officer. All first responders are safe and uninjured; a Quincy Police Officer who entered the water in a wet suit during rescue efforts was transported via EMS to a local hospital for precautionary reasons. Massachusetts State Police will not be releasing her name.