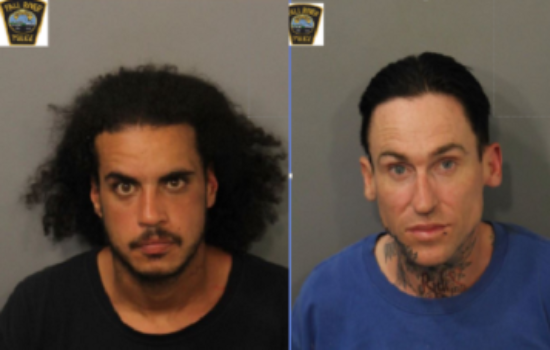 According to Detective John Robinson, at approximately 10:30 p.m., Uniform Division officers Guy R. Furtado and Neil Rodrigues were dispatched to Pleasant Street, near the police station, for a male covered in blood. The male, a 31 year old homeless man from Abington, was located in front of the station with several lacerations and puncture wounds to his head. The victim was transported to a local hospital with non-life-threatening injuries.

The victim stated he was attacked and cut by two people known to him as Ryan Ohare, 37, and Jayce Pastrana, 31, over an incident involving a former girlfriend. The attack took place at Hartwell Quick Stop at 350 Rodman Street where evidence of the assault was collected. After a canvass of the area Jayce Pastrana of Wareham and Ryan Ohare of Somerset were located near Stop & Shop on Rodman Street and both were in possession of knives. Both males were taken into custody on charges of Assault and Battery with a Dangerous Weapon (Knife).