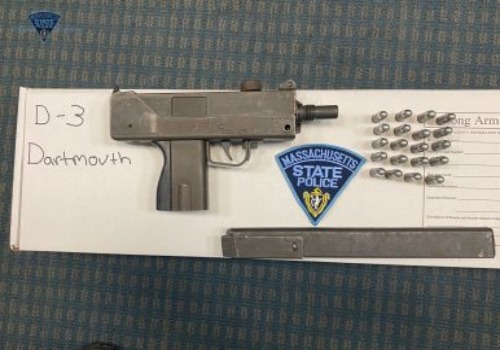 At approximately 2:49 a.m., Trooper Joseph Kubicek, who is assigned to the State Police – Dartmouth Barracks, was on patrol of I-195 Eastbound in the city of New Bedford, when he stopped a 2004 Pontiac Sunfire for a motor vehicle violation.

According to Massachusetts State Police, the vehicle was occupied by four occupants. After a brief investigation, the two rear passengers, who initially gave false identification, were identified as Tyler R. Pina, 23, of Taunton, and Raymond A. Clark, 35, of New Bedford, were found to be in possession of a MAC 10 Semi-Auto .45 caliber firearm. Police stated that neither Pina or Clark are licensed to carry firearms. In addition to the firearm, Clark was also found to have three outstanding arrest warrants.