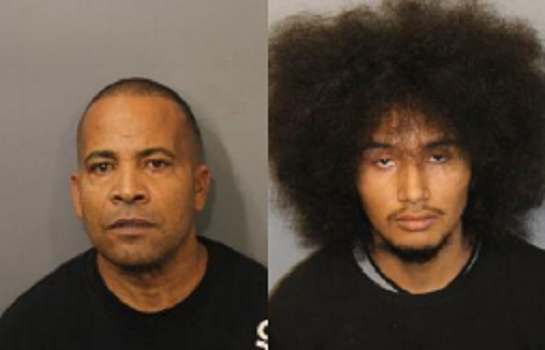 The Fall River Police have arrested two people in a Monday morning shooting in the city.

According to Lieutenant Jay Huard, at 8:40 a.m., Officer David DelValle along with several other officers, were dispatched to the area of Washington Street regarding a shooting in which a light skinned black man wearing a black zippered up sweatshirt, black back pack, and puffy hair was seen running from the scene.

As officers arrived within three minutes of being dispatched, Officer Keith Pires located a male, identified as 56-year-old Hugan Thompson, near his vehicle, a gray colored SUV, which was parked across the street from Untouchable Kutz, 524 South Main Street.

Thompson was accompanied by two other individuals, according to Huard. Officer Pires was able to identify Thompson as a shooter involved in the incident and immediately confiscated a Glock 35 (.40 Caliber) firearm, along with a full ten round magazine and an empty magazine, which Thompson surrendered without incident. Upon request, Thompson also provided his MA License to Carry Class A Large Capacity card.

Walking Beat Officers Richard Saraiva and John Ruggiero located a man fitting the description given by witnesses. The man was walking on the west sidewalk of South Main Street near Columbia Street. Kenneth Smart,22, was immediately taken into custody and was carrying a black backpack that contained an LG Cellphone, black revolver style BB gun, and four empty Jim Bean nip bottles, according to police. A large silver hunting knife was also discovered in Smart’s possession. Smart had a small cut to his left hand, which he told officers he cut while jumping a fence.

The preliminary investigation has revealed that Thompson had arranged to sell marijuana to Smart at the location of the shooting. Both men met up and Smart stated, “This is a robbery”. Thompson noticed Smart was holding a gun inside a backpack as he had it unzipped and held it inside. Smart demanded money from Thompson and stated he was going to shoot the people he was with. Thompson drew his firearm from his waistband and told the male to drop his firearm. Thompson then ran around the back of his vehicle as he followed Smart. Smart then ran across the street in front of Untouchable Kutz. Thompson then fired at Smart, firing a full ten rounds from his Glock 35.

It was determined that Thompson had acted negligently relevant to the discharge of his firearm. He was placed under arrest and his MA LTC was seized and will be forwarded to the the Licensing Authority for immediate revocation.

Smart, with a listed address on William Street in Fall River, was charged with Armed Robbery.