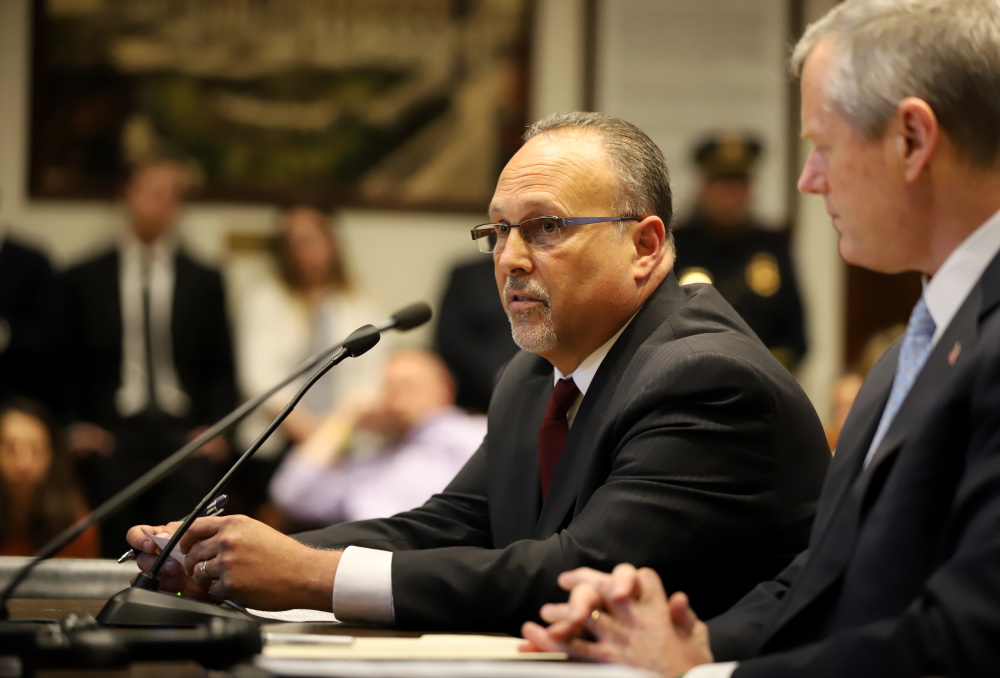 SEPT. 11, 2020…..Month after month, there are murders, kidnappings and rapes in Massachusetts that might be prevented if the Legislature were to advance one of Gov. Charlie Baker’s legislative priorities, Public Safety Secretary Thomas Turco wrote to lawmakers Thursday in a plea for late-session action on a bill that’s so far gained little traction in the Democrat-controlled Legislature.

Pointing to the case of Shawn McClinton, a Level 3 sex offender awaiting trial on rape and kidnapping who was bailed out by the Massachusetts Bail Fund before allegedly kidnapping, beating and raping another woman, Turco said the Legislature must act quickly to make it easier for police and the court system to detain defendants deemed a risk to the community.

The secretary said the Supreme Judicial Court recently ruled that charges of statutory rape, indecent assault and battery on a child — “quintessentially dangerous crimes” — and the use of an incendiary device like a bomb in many circumstances are not grounds enough on their own to hold a person before their trial.

“The current statute governing bail and pre-trial release simply do not permit judges to make reasonable decisions to detain defendants charged with serious crimes who pose a clear and continuing risk to the public,” Turco wrote to Judiciary Committee Chairs Rep. Claire Cronin and Sen. Jamie Eldridge on Thursday.

Turco also raised the issue of a Whitman woman charged in connection with the death of a toddler who was bailed out and then allegedly went on to threaten to “slaughter” her neighbors. He said that case and that of McClinton “highlight a second significant limitation in the existing dangerousness statute: a prosecutor must either seek a dangerousness hearing during a defendant’s first appearance in court or forfeit that ability entirely.”

The first bill Baker filed in his second term (H 66) would allow judges to consider more than just the specific charges before them when making a decision to release a defendant, expand the list of offenses that can be used to hold a defendant as a dangerous person before their trial, and would permit prosecutors to seek a dangerousness hearing at any point in a criminal proceeding, not just at the outset. It mirrors a bill Baker filed the previous session, two months after a Weymouth cop was killed by a suspect out on bail.

The Judiciary Committee gave the governor’s bill a hearing in May 2019, and in June 2019 House Speaker Robert DeLeo told reporters the House planned to take up “part of” Baker’s dangerousness bill that month. But the bill never moved out of the Judiciary Committee and it has been sitting there since.

The pre-trial bail reform provisions have had the support of police chiefs including Boston Police Commissioner William Gross, and were opposed by the local chapter of the American Civil Liberties Union.

“Session after session, advocates for reform have been told that it could not move forward because there was the absence of empirical data to justify some of the progressive reforms that we had been advocating for,” Rahsaan Hall, the racial justice program director for the American Civil Liberties Union’s Massachusetts chapter, said at last year’s hearing. “Now we sit on the heels of some pretty progressive and transformative legislation that was enacted last session and are presented with a bill that would dramatically draw back some of those reforms without a scintilla of evidence that the proposed reforms that are included in the governor’s bill are rooted in science or data or any type of empirical analysis.”

In early August, House lawmakers agreed to a third extension for the committee, giving the panel until Nov. 12 to decide what to do with Baker’s bill. Typically, an issue left in committee this late in the legislative session would be considered dead, but legislators extended their time allowed for formal business until early January 2021.

“Taking away someone’s freedom while they await a charge is a serious matter, which is why I understand the need for careful deliberation. But after nearly two years’ worth of such deliberation, and following these recent developments, I ask that the committee report out the Governor’s bill favorably as soon as possible. You have a rare opportunity to close this loophole and protect the public from violent people now that the legislature’s formal session has been extended,” Turco wrote. “Serious crimes, from murder to rape and kidnapping, crimes you could help prevent, continue to occur month after month.”

The House and Senate in late July voted to extend formal sessions for the year into early January but in the ensuing six weeks have kept an extremely light schedule. Legislative leaders in July didn’t indicate if they intended to limit their focus in extended sessions to state budget bills and five major bills pending before conference committees, or open up the menu to the full slate of legislation pending before the branches.