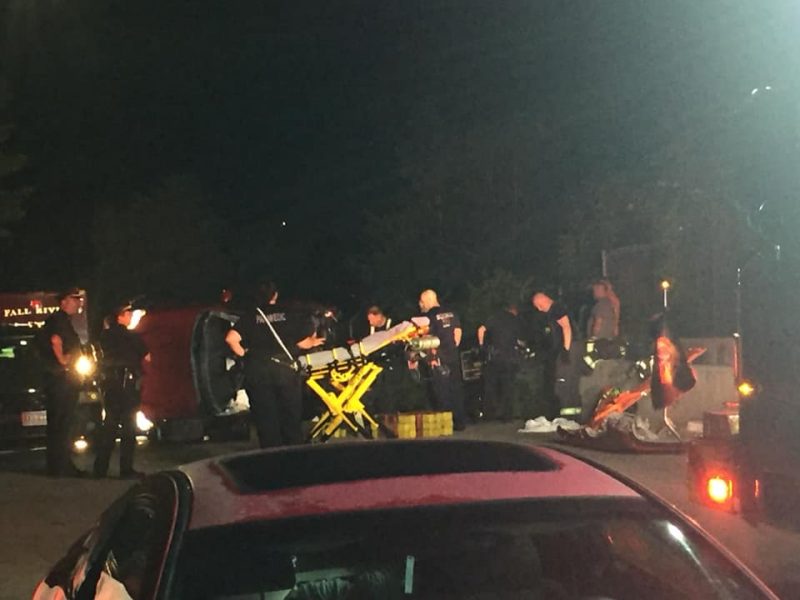 A serious crash Tuesday night has led to injuries and charges.

According to Detective John Robinson, at approximately 11:00 p.m., Uniform Division Officer Marcus Watson was dispatched to the area of Almond and William Streets in response to a call of a vehicle crash. On arrival, Officer Watson observed a red 2015 Mitsubishi Outlander resting on its side along with what was later determined to be a passenger of the Mitsubishi holding the hand of the 25 year old operator, who was trapped inside. The operator, who was alert and conscious, had to be removed from the vehicle by mechanical means by Fall River Fire Department personnel.

A 21-year-old Fall River female passenger was also trapped in the vehicle and was removed by mechanical means. A third passenger, a 30-year-old male from Fall River, was able to get out and was holding the hand of the operator as police and rescue arrived.

The operator stated to Officer Watson that she dropped her phone on the floor under the pedals and looked down for a second to retrieve it prior to the crash. The operator was transported to a Rhode Island hospital for treatment of her injuries (possible abdominal and left arm deformity) while the two passengers were taken to a local hospital for evaluation (the female complaining of a headache and the male injured his knee and wrist).

The operator will be summoned to court at a later date on charges of Negligent Operation of a Motor Vehicle and Marked Lanes Violation. Two parked cars were also damaged (a 2000 Nissan Sentra and a 2001 Toyota Rav4).