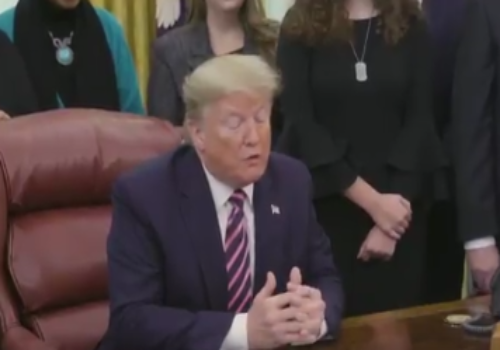 President Trump has issued new guidelines when it comes to religious expression in schools.

This week Trump took steps to protect the right to pray in public schools.

“So you have the right to pray. And that’s a very important and powerful right. There’s nothing more important than that, I would say.”

Trump made comments during a National Religious Freedom Day event Thursday at the White House.

“In a sacred principle of our Republic that government must never stand between the people and God. Yet, in public schools around the country, authorities are stopping students and teachers from praying, sharing their faith, or following their religious beliefs. It is totally unacceptable. You see it on the football field. You see it so many times where they’re stopped from praying. And we are doing something to stop that.”

“Tragically, there is a growing totalitarian impulse on the far-left that seeks to punish, restrict, and even prohibit religious expression. Something that, if you go back 10 years or 15 years or 20 years, it was un-thought of that a thing like that could even happen — that anybody would even think of something like that happening.”

“That is why, today, my administration is issuing strong new guidance to protect religious liberty in our public schools. The right of students and teachers to freely exercise their faith will always be protected, including the right to pray.”

“We will not let anyone push God from the public square. We will uphold religious liberty for all.”

The actions by the Trump Administration is as follows:

To receive Federal funds, local educational agencies must confirm that their policies do not prevent or interfere with the constitutionally-protected rights to pray.

The updated guidance by the Trump Administration will help improve individuals’ ability to file a complaint if they are denied the ability to participate in protected religious expression.

The new guidance states that students can read religious texts or pray during recess and other non-instructional periods, organize prayer groups, and express their religious beliefs in their assignments.