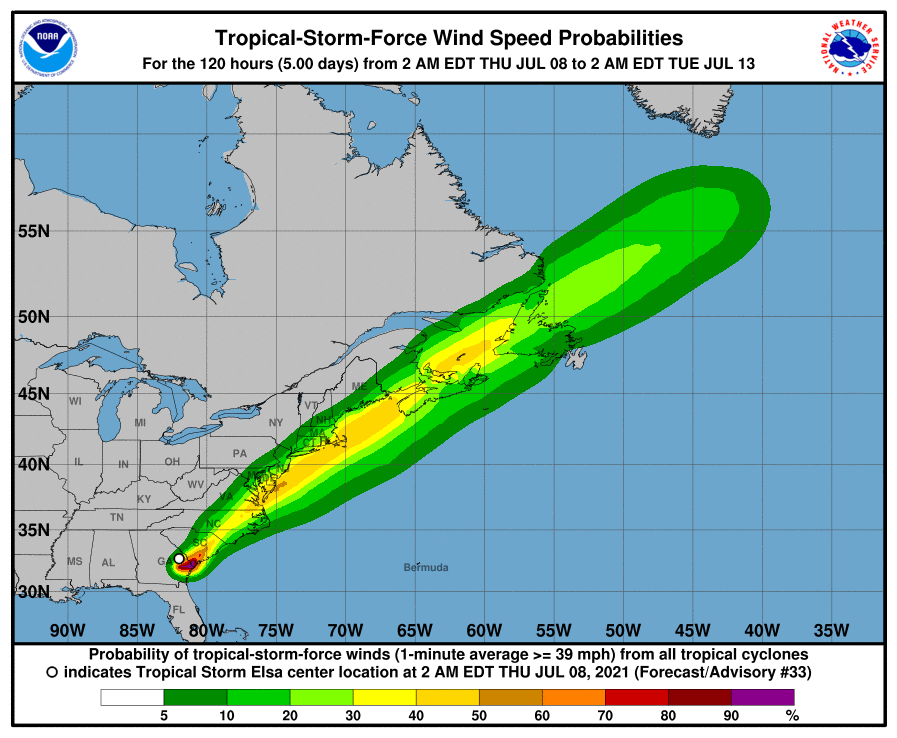 A Tropical Storm Warning means tropical storm-force winds are expected somewhere within this area within the next 36 hours.

A Flash Flood Watch has also been issued from late tonight through Friday afternoon.

Tropical Storm Elsa is forecast to track near Block Island and the south coast Friday. The strongest winds should arrive Friday morning and will be focused on areas near the coast, especially on Cape Cod and the Islands. The threat for flooding rain should be greatest across interior southern New England where the heaviest rain is expected to fall. Elsa will rapidly exit the region by Friday night.

The National Weather Service has issued the following information.

FLOODING RAIN:
Prepare for life-threatening rainfall flooding having possible extensive impacts across interior southern New England. Rainfall of 2 to 4 inches with isolated higher amounts up to 6 inches are possible late tonight through Friday afternoon. This rainfall brings the threat for flash flooding, with the main flood threat being along urban and poor drainage areas as well as small streams. Potential impacts include:
– Major rainfall flooding may prompt many evacuations and rescues, especially in urban areas.
– Rivers and tributaries may rapidly overflow their banks in multiple places. Small streams, creeks, and ditches may become dangerous rivers.
– Streets and parking lots become rivers of moving water with underpasses submerged. Driving conditions become dangerous. Many road and bridge closures could occur.

WIND:
Prepare for dangerous wind having possible significant impacts near the South Coast, Cape Cod, and the Islands. Potential impacts in this area include:
– Some damage to roofing and siding materials, along with damage to porches, awnings, carports, and sheds.
– Several large trees snapped or uprooted, but with greater numbers in places where trees are shallow rooted.
– Some roads impassable from large debris, and more within urban or heavily wooded places. A few bridges, causeways, and access routes impassable.
– Power and communications outages possible, but more prevalent in areas with above ground lines.

Also, prepare for hazardous wind having possible limited impacts across the remainder of Rhode Island and eastern Massachusetts.

TORNADOES:
Prepare for a tornado event having possible limited impacts across Southern New England. Potential impacts include:
– The occurrence of isolated tornadoes can hinder the execution of emergency plans during tropical events.
– A few places may experience tornado damage, along with power and communications disruptions.
– Locations could realize roof damage, large tree tops and branches snapped off, shallow-rooted trees knocked over, and small boats pulled from moorings.