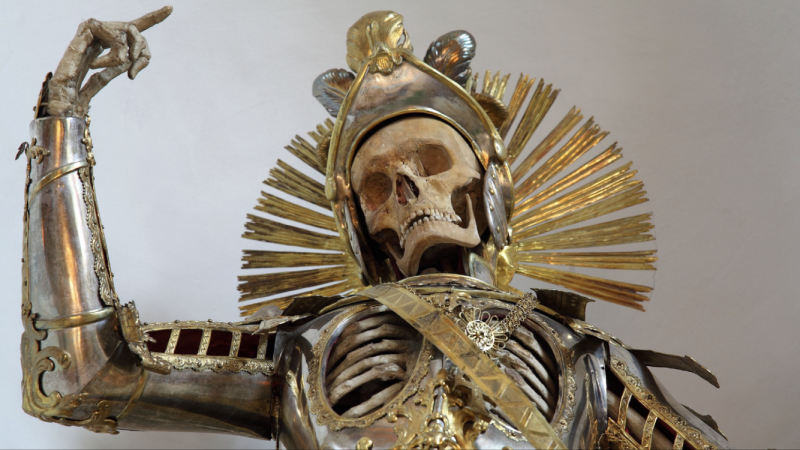 The Skeleton in Armor is a name given to a skeleton which was unearthed in Fall River, Massachusetts in 1831-1832. The skeleton was subsequently destroyed in a fire in 1843, thus the origins of the mysterious artifact have never been rightfully determined.

At the time of its finding, it was believed to be the skeleton of a Native American but others, including the author Henry Wadsworth Longfellow, felt the remains may have been of Viking origin. All accounts of the man’s history and origins, however, are purely speculation based on the contents found with him at the burial site, written accounts and the following sketch: 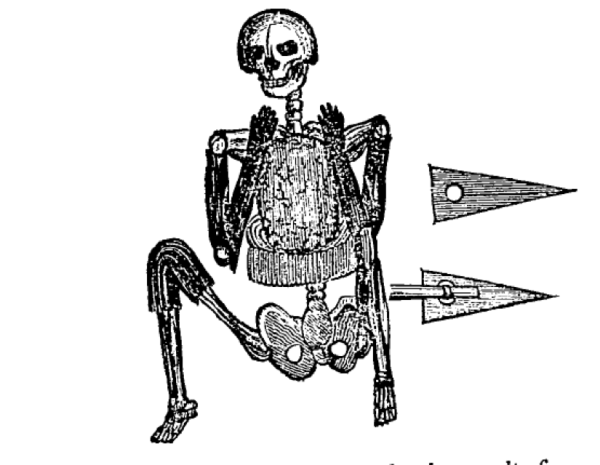 Some information about the Skeleton via a Wikipedia article on the subject:

“A contemporary account of the skeleton’s discovery and general appearance was written by a Dr. Phineas W. Leland in 1843, soon after the artifact’s destruction. The text of the description was as follows:

Among the curiosities of peculiar interest (in the cabinets of the Fall River Athenaeum) was the entire skeleton of a man, about which antiquarians in the old as well as the new world had speculated much. The skeleton was found in the year 1832 in a sand- or grave-bank a little east of the Unitarian meetinghouse by some persons while digging away and removing a portion of the bank. (On or very near the site now occupied by the “Gas-Works”, corner of Hartwell and Fifth Streets). The skeleton was found near the surface in a sitting posture, the legbones doubled upon the thigh-bones, and the thighs brought up nearly parallel with the body. It was quite perfect, and stood remarkably well the test of exposure. Covering the sternum was a triangular plate of brass somewhat corroded by time, and around the body was a broad belt made of small brass tubes four or five inches in length about the size of a pipestem placed parallel and close to each other. Arrowheads made of copper or brass were also found in the grave with the skeleton. That these were the remains of an Indian seemed to be very generally conceded; the configuration of the skull, the position in which the skeleton was found, and the additional fact that parts of other skeletons were found near the same place renders it nearly certain that these were the bones of an Indian. 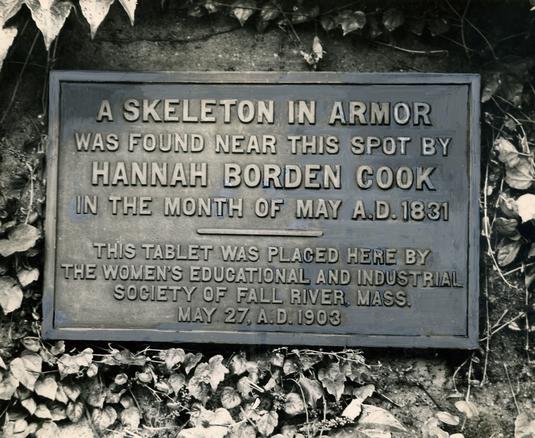 Another description of the artifact written by John Stark, a lawyer in Galena, Illinois appeared in the 1837 volume of the American Magazine of Useful and Entertaining Knowledge:

These remains were found in the town of Fall River, in Bristol County, Mass., about eighteen months since. In digging down a hill near the village, a large mass of earth slid off, leaving in the bank and partially uncovered a human skull, which, on examination, was found to belong to a body buried in a sitting posture, the head being about one foot below what had been for many years the surface of the ground. The surrounding earth was carefully removed and the body found to be enwrapped in a covering of coarse bark of a dark color. Within this envelope were found the remains of another of coarse cloth, made of fine bark and about the texture of a Manilla coffee-bag. On the breast was a plate of brass, thirteen inches long, six broad at the upper end and five at the lower. This plate appears to have been cast, and is from one-eighth to three thirty-seconds of an inch in thickness. It is so much corroded that whether or not anything was ever engraved upon it has not yet been ascertained. It is oval in form, the edges being irregular, apparently made so by corrosion.

Below the breastplate, and entirely encircling the body, was a belt composed of brass tubes,each four and a half inches in length and three-sixteenths of an inch in diameter, arranged longitudinally and close together, the length of the tube being the width of the belt. The tubes are of thin brass, cast upon hollow reeds, and were fastened together by pieces of sinew. This belt was so placed as to protect the lower parts of the body below the breastplate. The arrows are of brass, thin, flat, and triangular in shape, with a round hole cut through near the base. The shaft was fastened to the head by inserting the latter in an opening at the end of the wood, and then tying it with a sinew through the round hole, a mode of constructing the weapon never practiced by the Indians, not even with their arrows of thin shell. Parts of the shaft still remain attached to some of them. When first discovered the arrows were in a sort of quiver of bark, which fell in pieces when exposed to the air.

The skull is much decayed, but the teeth are sound and apparently of a young man. The pelvis is much decayed and the smaller bones of the lower extremities are gone.
The integuments of the right knee, for four or five inches above and below, are in good preservation, apparently the size and shape of life, although quite black.

Considerable flesh is still preserved on the hands and arms, but more on the shoulders and elbows. On the back under the belt, and for two inches above and below, the skin and flesh are in good preservation, and have the appearance of being tanned. The chest is much compressed, but the upper viscera are probably entire. The arms are bent up, not crossed, so that the hands turned inwards touch the shoulders. The stature is about five and a half feet. Much of the exterior envelope was decayed, and the inner one appeared to be preserved only where it had been in contact with the brass.

The preservation of this body may be the result of some embalming process, and this hypothesis is strengthened by the fact that the skin has the appearance of having been tanned, or it may be the accidental result of the action of the salts of the brass I during oxidation, and this latter hypothesis is supported by the fact that the skin and flesh have been preserved only where they have been in contact with or quite near the brass, or we may account for the preservation of the whole by supposing the presence of salt peter in the soil at the time of the deposit. In either way, the preservation of the remains is fully accounted for, and upon known chemical principles.

That the body was not one of the Indians we think needs no argument. We have seen some of the drawings taken from the sculptures found at Palenque, and in those the figures are represented with the breastplates, although smaller than the plate found at Fall River. On the figures at Palenque the bracelets and anklets seem to be of a manufacture precisely similar to the belt of tubes just described.

If the body found at Fall River be one of the Asiatic race, who transiently settled in Central America, and afterwards went to Mexico and founded those cities, in exploring the ruins of which such astonishing discoveries have recently been made, then we may well suppose also that it is one of the race whose exploits have, although without a date and almost without a certain name, been immortalized by Homer. Of the great race who founded cities and empires in their eastward march, and are finally lost in South America, the Romans seem to have had a glimmering tradition in the story of Evander.

But we rather incline to the belief that the remains found at Fall River belonged to the crew of a Phoenician vessel. The spot where they were found is on the sea-coast, and in the immediate neighborhood of Dighton Rock, famed for its hieroglyphic inscriptions, of which no sufficient explanation has yet been given, alla near which rock brazen vessels have been found. If this latter hypothesis be adopted, a part of it is that these mariners, the unwilling and unfortunate discoverers of a new world, lived some time after they landed, and having written their names, perhaps their epitaphs, upon the rock at Dighton, died, and were buried by the natives.”