Invention, in the most literal sense, is at the heart of the delightfully creative desserts crafted at the aptly titled ‘Donut Factory’ at 102 Rockdale Ave in New Bedford. The Donut Factory opened in October of 2017 and is the brainchild of Jackie Pinheiro, who says the film ‘Willy Wonka & The Chocolate Factory’ was a childhood favorite and played a large role in the style and decorum of her charmingly unique coffee shop. The Donut Factory team is even crafting a “Golden Ticket Giveaway” inspired by the film’s plot. (More to come on that. Patience, Veruca.)

When prompted about what separates The Donut Factory from other coffee and donut shops, Pinheiro’s enthusiasm was evident. “Our atmosphere is pretty unique! The location is Steampunk-themed and we really try to craft an experience for customers entering our shop. We want them to sit and enjoy their time with us because customer service is such a huge part of the Donut Factory experience. You will always be greeted with a smile.”

Jackie runs the shop with a team of equally passionate employees led by restaurant manager Carla Duarte, whose ten years of experience in the industry and passion for customer engagement helps keep things running smoothly. Said Pinheiro of her partner, “She is the mastermind behind the operation and comes up with some extraordinary recipes with our creative team.”

And creative they are. If you recall, Willy Wonka’s factory offered much, much more than chocolate (Snozzberries taste like Snozzberries!) Likewise, The Donut Factory serves so much more than their namesake. Beyond the numerous traditional and attention-grabbing donuts available (Strawberry Shortcake, Maple Bacon, Strawberry Kiwi Cheesecake, Smores, Snickers, M&M, Chicken and Waffles, Buffalo Chicken, etc.) the shop also offers an impressive array of sub, sandwich and bagel options.

The Donut Factory doesn’t cut any corners when coffee and beverages are involved either. They feature an eight-keg nitro coffee system from Massachusetts roasters ‘Church Street Coffee’ which offers flavors like peppermint, mocha, pumpkin, chai tea, cinnamon and dark roast. They also offer their own customized iced coffee called “X Factor” which is designed to be energizing and tastes like everyone’s favorite nostalgia-inducing New England staple, coffee milk. 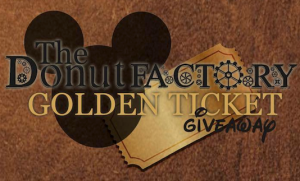 Though they’ve only been open since October, The Donut Factory is already finding ways to give back to the community they credit for keeping the cogs turning. As mentioned, the shop is currently organizing a Willy Wonka-style “Golden Ticket Giveaway” wherein 100 prize tickets will be hidden in the shop between December 26 and March 31. If you find one, you will win one of various prize offerings including tickets to Disney on Ice and other events, Donut Factory tours, free donuts or coffee, discounts and more. Your “Golden Ticket” can then be entered into their grand prize drawing on March 31, 2018 for a chance to win a prize that would leave little Charlie green with envy.. a free trip to Disney World!

From their creative and friendly employees to their awe-inspiring menu options, their nostalic tip of the hat to a much adored film.. to their sense of community and spirit of giving, it seems that all engines are running at full steam at The Donut Factory. As nice as it is to see a new, locally run business succeed, it’s even nicer to see them share their success with the folks who helped to get them there.

“So shines a good deed in a weary world.“