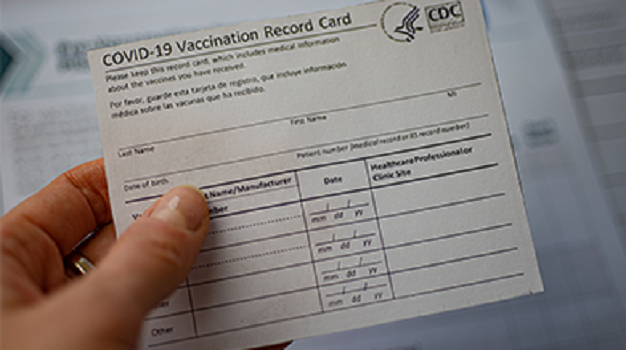 JAN. 10, 2022…..Vaccinated residents of Massachusetts beginning Monday will be able to access a digital record of their COVID-19 vaccine history, including a scannable QR code, that could be stored on their smartphone and presented to businesses requiring immunizations for entry.

Gov. Charlie Baker’s administration is rolling out the “COVID-19 SMART Health Care” just as the city of Boston prepares for a new vaccine requirement to take effect at the end of the week in all restaurants, gyms and entertainment venues. Boston is one of the few cities in the state to adopt a universal vaccine requirement for certain businesses, but in other communities, individual business owners have also decided to require customers to prove they are vaccinated.

Administration officials say the effort is designed to make it easier for residents to prove their status should they engage in any activities where proof of vaccination is required, but has no plans to require its use in businesses on a statewide basis.

The digital health card will be available by visiting www.myvaxrecords.mass.gov and entering a name, date of birth and either an email address or cellphone number. The system will pull up a resident’s full immunization record, including flu shots and other vaccines, by accessing data stored in the Massachusetts Immunization Information System.

Users will then be given the option to either take a screenshot or add their COVID-19 SMART Health Card with a QR code to their Apple wallet or similar non-iPhone application for easy access. The QR code will contain the user’s name, date of birth and only their COVID-19 vaccination history, along with verification for businesses that the record was produced by the state of Massachusetts.

Baker first mentioned that he was working with more than a dozen states on the creation of a universal digital COVID-19 vaccine passport in late November. Administration officials said that at least a dozen other states are using the SMART Health platform for vaccination verification, and the QR codes are comparable to the ones already available through many primary care providers and vaccine administrators like CVS and Walgreens.

While other states are using the same proof-of-vaccination system, officials said only shots administered in Massachusetts will show up on the digital vaccine card because it is only using data reported by all doctors and providers to the state MIIS database.

Anyone who received one or more doses outside of Massachusetts can contact their health care provider and ask them to upload that information to MIIS before accessing with SMART Health Card. Officials also said that while most records in the state database have a cellphone number, not all have an email address associated with the record.

If a resident is unable to access their records after first trying a cellphone number and then an email address, officials said they should contact their provider and ask them to upload the appropriate contact information to MIIS.

As of Friday, the Department of Public Health reported that more than 5.1 million residents were fully vaccinated with at least two doses of the Moderna and Pfizer vaccines or one dose of the Johnson and Johnson vaccine and 796,035 people had received their first dose of one of the two-dose vaccines.

Last month as the omicron variant was detected in Boston and cases began to surge, Mayor Michelle Wu announced that beginning Jan. 15 she would be requiring proof of at least one vaccine dose for indoor dining or to enter any fitness and entertainment establishments in the city.

Full vaccination for anyone 12 and older will be required by Feb. 15, and acceptable forms of proof include a Centers for Disease Control vaccination cards, a photo of the CDC card, or “any official immunization record or digital image from a pharmacy or health care provider, or on any COVID-19 vaccine verification app.”

Some other cities like Salem have adopted proof-of-vaccination requirements to enter businesses like restaurants, while others that considered the policy have held off for now. Somerville, for instance, postponed a decision in December. In other communities such as Brookline, individual businesses like the Coolidge Corner Theatre have voluntary begun requiring movie-goers to show proof of vaccination.

The vast majority of cities and towns, however, have not mandated vaccinations to enter certain businesses, and municipalities continue to maintain a patchwork of masking requirements.

The Massachusetts Restaurant Association, the National Federation of Independent Business, Retailers Association of Massachusetts and a number of regional chambers of commerce have all come out in opposition to vaccine mandates.

“Rather than one-size-fits-all, government-imposed mandates, we must return to economic normalcy by recognizing that personal responsibility and appropriate choices by individuals, employers, employees, and consumers represent the long-term path forward,” the groups said in a statement last week.

The business groups said that government mandates fail to recognize the unique characteristics of different businesses, including square footage, average density of people, how long patrons stay and the views of customers and employees.

The Baker administration said businesses wishing to use the new state sanctioned cards for verification can do so by downloading the SMART Health Care verifier app and scanning a customer’s QR code.