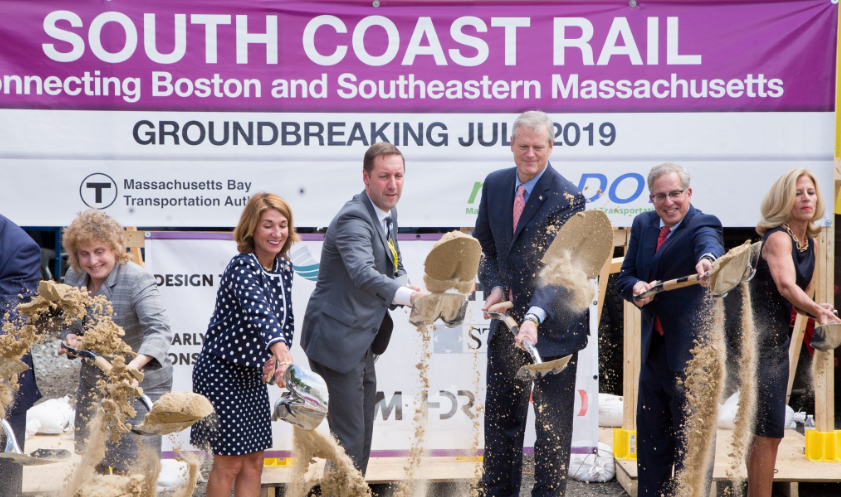 “South Coast Rail Phase 1 will connect Taunton, Fall River, New Bedford, and the surrounding areas to Boston, giving people more options to get to and from southeastern Massachusetts,” said Governor Charlie Baker. “We are proud to advance South Coast Rail further than it’s ever been as part of our administration’s $8 billion MBTA infrastructure investment plan over the next five years.”

“Having Phase 1 of South Coast Rail fully funded in the FY20-24 Capital Investment Plan is a significant milestone,” said Lieutenant Governor Karyn Polito. “Thank you to everyone who played a role in keeping this project going forward and we look forward to Phase 1’s start of service in 2023.”

“After years of advocacy, the day when this expansion project will provide service to Southeastern Massachusetts communities is finally in sight,” said MassDOT Secretary and CEO Stephanie Pollack. “This is a proud moment for MassDOT and the MBTA, and a proud moment for the Commonwealth. I look forward to watching the infrastructure in this corridor take shape and am eager for the day in 2023 when the very first train operates on this route carrying passengers.”

“Like the Green Line Extension, South Coast Rail is a priority that would not be possible without the strong support of the Baker-Polito Administration and the MassDOT and MBTA Boards,” said MBTA General Manager Steve Poftak. “The MBTA is excited to build on the foundation that MassDOT built, and to begin passenger rail service to the South Coast in 2023.”

“Since the first SouthCoast Rail Groundbreaking Ceremony I attended twenty-one years ago, the necessity of this project has only become more clear,” said Senator Michael J. Rodrigues. “The communities of the SouthCoast deserve to be economically competitive with the rest of the region, and SouthCoast Rail is a large piece of that. I applaud the Baker-Polito Administration for finally making this long-promised project a reality.”

“This is a milestone for transportation equity in the commonwealth and it has been a long time coming,” said Representative Bill Straus, House chair of the Joint Committee on Transportation. “After many attempts over the decades to restore rail service to the southeastern Massachusetts, we are under construction of the early steps to restore Commuter Rail to our region. I want to single out for praise Governor Baker who has been committed to the project and kept the promises he made to find an innovative and effective way to enhance rail service with the Phase I connection through Middleboro.”

“Residents in Greater New Bedford have been waiting years to gain access to Boston via rail,” said Senator Mark Montigny. “While we still have a long way to go to ensure completion, today marks a significant milestone in this long-overdue project. I am thankful we have a committed partner in Governor Baker to help us finally achieve real success that will undoubtedly provide an economic boost to New Bedford.”

“Today’s groundbreaking on Phase 1 of South Coast Rail represents a significant turning point in the on-going fight towards regional transit equity in Massachusetts,” said Representative Antonio Cabral. “The future of transportation looks much brighter for New Bedford and the entire South Coast region, thanks to our collective, relentless efforts to bring this project to fruition. I’m thrilled to be here today to see this project moving forward, which will provide New Bedford residents with commuter rail service we have long deserved.”

“Brockton’s 3 commuter rail stations have transformed how my region gets to work,” said Representative Michelle Dubois. “This extension of the Old Colony line will do the same for Fall River and New Bedford, while further expanding job options in my district and connecting our three similar Cities once again.”

“The South Coast Rail groundbreaking in Freetown is historic. For years, constituents of the South Coast have asked for more accessibility to Boston and the Commonwealth has spent years developing and planning this project,” said Representative Carole Fiola. “This groundbreaking symbolizes the physical start to this project which is beyond exciting and I am proud to be a part of it. I would like to thank the South Coast residents for their passion, persistence, and perseverance.”

“This is a great day for the people of New Bedford and Fall River who have been waiting so long for this project to come to fruition,” said Representative Susan Gifford. “But it is also a great step forward to expanding commuter rail service in the future to other areas of the South Coast such as Wareham and Buzzards Bay. I applaud the Baker-Polito Administration for their commitment to delivering the South Coast Rail Project.”

“We on the South Coast have been eagerly awaiting better transportation opportunities such as the rail for well over two decades. For us South Coast Rail is not just a means by which to get to greater Boston, but a means to expand our collective economic development efforts,” said Representative Patricia A. Haddad, Speaker Pro Tempore.

“It is imperative that the Commonwealth move firmly in the direction of lower emissions and reduced congestion,” said Representative Chris Hendricks. “This project works toward easing both of these urgent problems while providing South Coast residents improved access to jobs and other opportunities.”

“The Baker/Polito Administration has made good on their promise to see that this rail system comes to fruition,” said Representative Steven Howitt. “South Coast Rail will not only be an economic boost to Southeastern MA, but the train will also, and more importantly, address the traffic congestion into Boston for the South Coast’s many commuters.”

“This increased access will open new opportunities to residents of Southeastern Massachusetts who otherwise would have been prevented from travelling such great distances,” said Representative Paul Schmid. “The Baker/Polito team are delivering on what we in the south coast have been fighting for over the last 25 years.”

South Coast Rail early action projects currently underway have included infrastructure work on track, culverts, and bridges as well as the acquisition of land for stations:

• Early action culverts: awarded to JF White in March 2019 with right of way clearing having begun and the first culvert installed in late April 2019;

• Early action for four bridges: contract awarded by MassDOT Board in April 2019.

• Advancing a portion of the Northern Corridor’s 30% design;

In April 2019, MassDOT and the MBTA announced that the South Coast Rail Program recently reached two critical Phase 1 milestones. First, a finance plan was completed and fully funded in the Commonwealth’s Capital Investment Plan. Second, the U.S. Army Corps of Engineers (USACE) approved the final federal permit required for the program to advance.

With a recently agreed upon total program cost of $1.047 billion, Phase 1 of the South Coast Rail Program will be funded 100 percent by the Commonwealth through a combination of general obligation bonds and special obligation bonds to be issued under existing authorization for the Rail Enhancement Program. The MBTA is not required to issue any revenue bonds that might otherwise impact the MBTA’s future operating budgets. All bond cap provided to the South Coast Rail Program will be in addition to the bond cap that MassDOT currently receives to fund its capital plan. There will be no reduction in bond cap allocated to MassDOT as part of the South Coast Rail Finance Plan.

Other permitting milestones that have been achieved this year include the final USACE approval and the issuance of the Chapter 91 License, MassDEP 401 Permit, and the Mass Coastal Zone Management Consistency Review.

• Upgrading the existing Middleborough Secondary track from Pilgrim Junction to Cotley Junction (a distance of 7.1 miles);