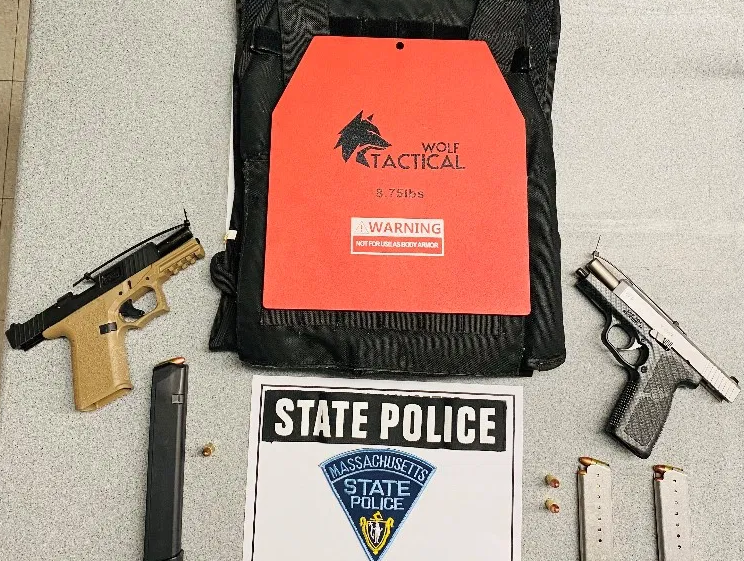 Two were arrested this morning on gun charges after a shots fired call, a pursuit, and then a car crash.

According to Dave Procopio of the Massachusetts State Police, at 2:02 a.m. today, Trooper Thomas Shruhan from the State Police-Milton Barracks was on patrol on Route 28 in Milton when he observed a blue 2018 Mercedes-Benz sedan that drew his interest. The Mercedes was the subject of a prior “Be On the Lookout” bulletin after it fled the area of a shots fired call in Boston’s Mattapan district on Jan. 2.

Trooper Shruhan followed the suspect vehicle onto Route 24 southbound, where he was backed up by Troopers Joseph Connor and Aaron Richardson, and the Troopers attempted to initiate a high-risk felony stop. The Mercedes accelerated in an effort to evade the Troopers, abruptly exiting Route 24 onto Route 27, heading eastbound at a high rate of speed. At that point the active pursuit was terminated but Troopers followed in that direction.

While approaching the intersection of Route 27 and West Avenue, the suspect who was driving lost control of the vehicle and crashed into a pole. Troopers and Brockton Police officers converged on the crashed vehicle and took two males into custody.

From the vehicle, Troopers recovered the following items:

A loaded polymer 9mm handgun with no serial number;
A loaded Kahr Arms 9mm handgun;
Two Kahr magazines;
One 33-round large capacity magazine;
48 rounds of 9mm ammunition; and
A ballistic armor vest carrier (the vest into which ballistic plates are inserted).

Both occupants are charged with illegal possession of firearms, carrying loaded firearms, possession of a large capacity feeding device, and unlawful possession of ammunition. They are identified as Jhovanni Jackson, 21, of the Bronx, N.Y., the suspected driver; and Aquan A. Hudson, 22, of Brocton, believed to be passenger.

The driver, Jackson, is additionally charged with multiple motor vehicle offenses, use of body armor in a felony, resisting arrest, and refusing to identify himself to police. The passenger, Hudson, was found to be the subject of two outstanding warrants and was additionally charged accordingly.

Both suspects were transported to Good Samaritan Hospital under MSP guard. Hudson was treated and released, was booked at an MSP barracks, and was expected to be arraigned today in Brockton District Court. Jackson remained hospitalized as of this writing and will be booked and arraigned upon his release from the hospital.