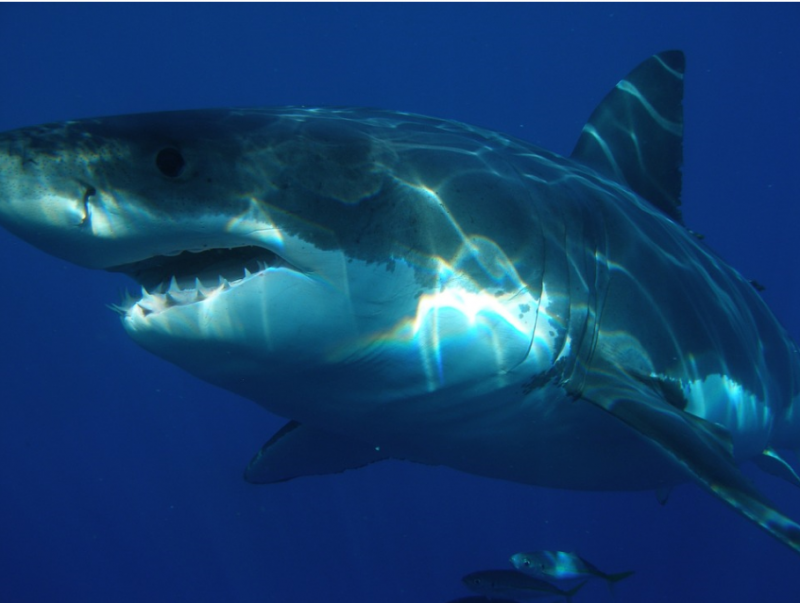 Wednesday, the Atlantic Shark Institute (ASI), announced that their acoustic Shark Array detected four different great white sharks in the waters surrounding Block Island, RI. This is the second year this acoustic array has been in place and it is the most significant finding to date.

“We increased the number of acoustic receivers around Block Island from two in 2019 to seven this season and we assumed that this might be the result” shared Jon Dodd, Executive Director of the Atlantic Shark Institute. Dodd added, “This is just the second year in what will be a long-term study, so we are happy to be able to document and assess this activity in greater detail as we move forward with this important research”.

The four white sharks ranged in size from a little more than 8 feet to the largest, a male, at over 13 feet in length. Dodd shared that all the great whites detected had been tagged by Dr. Greg Skomal from the MA Division of Marine Fisheries. The largest of the sharks was tagged in August of 2015 while the most recent was tagged in September of 2019. Dr. Skomal’s white shark tagging study has been conducted since 2009.

The four sharks were detected using acoustic receivers that pick up an acoustic ping that is sent out from these tags attached to the sharks. Each tag is unique in number which allows researchers to know exactly what shark was in the area, the day and the exact time. These sharks were detected at the Block Island Wind Farm, the Southwest Ledge, the Southeast Corner of Block Island, and on the West Side of the Island.

Interestingly, one of these sharks, named Miss Carolina, was tagged off Hilton Head, SC by Captain Chip Michalove in 2017. Dodd and the ASI have been assisting Dr. Skomal and Michalove in those research efforts and Dodd has caught almost 10 of those white sharks to date. “I think she just wanted to come by to say hello” shared Dodd. “It had been a few years” he added.

This research is being done in collaboration with the Dr. Conor McManus with the RI Department of Environmental Management, Division of Marine Fisheries.