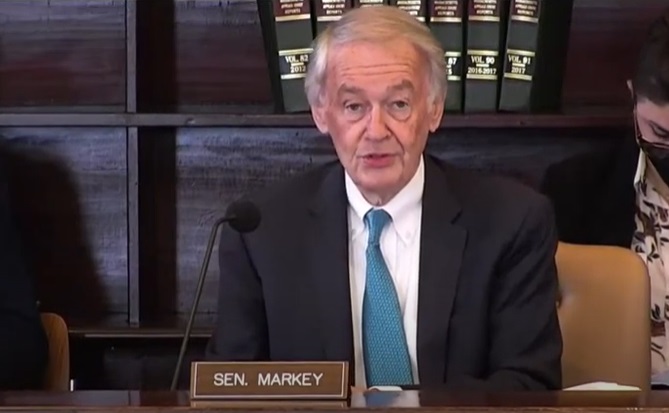 Boston – Senator Edward J. Markey, Chair of the Environment and Public Works Subcommittee on Clean Air, Climate, and Nuclear Safety, Friday hosted a subcommittee field hearing in Plymouth, Massachusetts with Congressman William R. Keating, titled Issues Facing Communities with Decommissioning Nuclear Plants. During the hearing, Senator Markey secured commitments from Holtec, the company charged with decommissioning the Pilgrim Nuclear Power Plant, that it would not discharge any radioactive, contaminated water into Cape Cod Bay from the plant without the consent of stakeholders. He also secured a commitment from Holtec that it would work with an independent body with marine experience to test the water, that it would provide a financial backstop to ensure full decommission and clean-up of the plant site, and it would meet with union representatives from the Laborers, Ironworkers, Carpenters, IBEW, and Operating Engineers regarding an ongoing labor dispute.

“We will hold Holtec accountable for these commitments to the communities that surround Pilgrim, and we will work to ensure the NRC upholds its responsibility to be a watchdog on the decommissioning process,” said Senator Markey. “Over the years, communities with decommissioning nuclear power plants have repeatedly called on the Commission to be a good partner and for nuclear companies to be good neighbors. Today’s hearing is a notice to both that we will not allow these responsibilities to go unmet any longer.”

“Today’s hearing cemented what we already knew: that the NRC has given too much leeway to licensees. The government is entrusted with the regulation of nuclear energy as well as the environmental impacts that energy has on our communities. It’s clear, however, that the community has been left out of this process; yet they are the ones that will feel the impacts for generations from this plant being here and the ones who are paying for decommissioning. The NRC confirmed today that trucking away the waste is a viable alternative to dumping water in Cape Cod Bay. Frankly, it is not an alternative, but the only proper course of action,” said Congressman Keating.