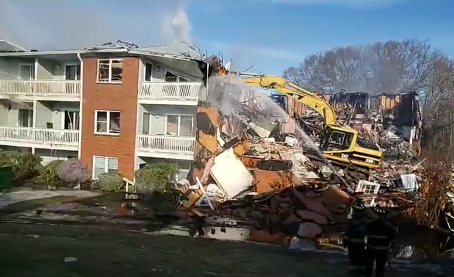 Photo courtesy of screen shot of video from Brian Fraga

The 75-year-old woman who was a passenger in the car that crashed into a Fall River apartment building yesterday has died.

Leahey was a passenger in a 2008 Pontiac Grand Prix being driven by Judith Mauretti shortly before 9:40 a.m. yesterday when it crashed into Building 15 at the Four Winds Apartments on North Main Street in Fall River.

Mauretti was declared deceased at the scene of the crash.

Leahey, however, survived the crash and was rushed to Rhode Island Hospital, where she eventually succumbed to injuries sustained in the crash and resulting fire.

According to Fall River Fire Chief John Lynch, the vehicle crashed and hit a gas line in the maintenance room causing the 6 alarm fire. Witnesses stated that the car was going at a high rate of speed. Seven firefighters were transported to the hospital with heat related conditions, but appear to be ok. Lynch estimated that eighty residents have been displaced. One pet has been revived and seven total have been recovered. There was no sprinkler system in the building. Crews will be on scene for some time and more than 100 firefighters responded to the call according to Lynch.

Four Winds building being torn down. Details on the fire: https://fallriverreporter.com/name-of-deceased-released-in-fatal-fire-at-fall-river-housing-complex/

The demolition of the building began this morning with crews pouring water on the debris as the site reignited overnight.

Police and fire officials continue to investigate the fatal car crash and the ensuing apartment fire.