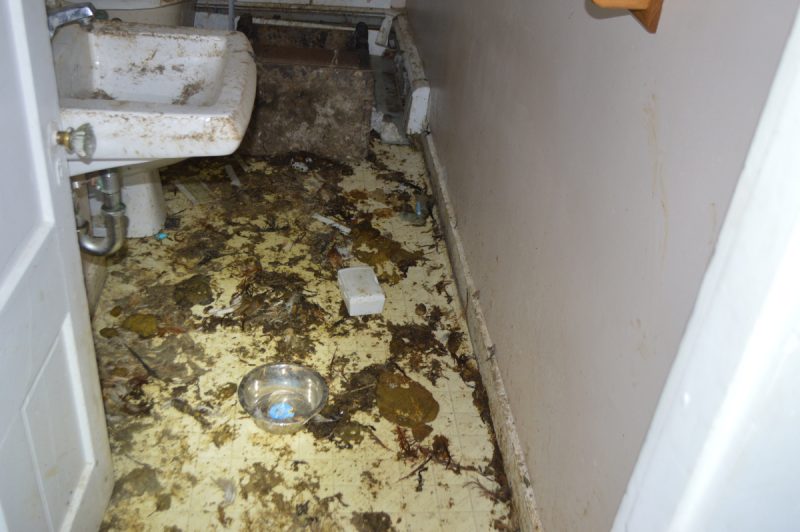 On 3/29/18 at around 9:00pm, the RISPCA was contacted by Woonsocket Police and Animal Control to assist with a possible animal cruelty case at 36 Cottage St., Woonsocket, RI.

Upon arriving RISPCA discovered 17 dogs living in absolutely deplorable conditions. There were 9 adult pit bull type dogs and 8 three-week-old puppies living in what was presumed to be weeks or months buildup of feces and urine. In addition to the dogs, there were also 4 adult chickens and about a dozen adolescent chickens as well as a bathtub full of chicken carcasses and one dead piglet.

“No one should have been living there.” said Joe Warzycha, Director of Operations at the RISPCA “This was the worst I’ve seen in quite a while. We haven’t been able to fully assess the condition of animals but additional charges will be levied if needed.”

Korina Ferreira, age 40, of Fall River was arrested and charged with 17 counts of animal cruelty. Ferriera surrendered the fowl to authorities but was not willing to sign dogs over.

The animals are being held at local animal shelters until which time they are signed over to authorities or a court rules her unable to own these animals.

Ferriera is a repeat offender by her own admission having served several months in prison in Massachusetts in 2013 on animal cruelty charges.

All photos courtesy of RISPCA