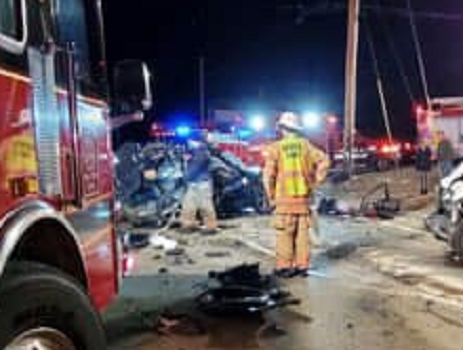 Rhode Island State Police are looking for the public’s help concerning a serious crash on Friday.

The investigation revealed that Steven Casey, age 43, of Mansfield, Connecticut, was operating a Chevrolet Silverado erratically, and at a high rate of speed, on Route 6 West in the Town of Foster. At the intersection of Route 6 and Cucumber Hill Road, Casey struck the rear end of a Toyota Camry that was stopped in the left lane, waiting to turn left onto Cucumber Hill Road. This collision caused extensive damage to the rear end of the Toyota and consequently caused it to travel into the eastbound lanes of Route 6. The Toyota was then struck on its passenger’s side by a GMC Sierra traveling Route 6 East, resulting in heavy damage. Casey’s vehicle continued westbound at a low rate of speed and struck the rear end of a tractor trailer.

The operator of the Toyota suffered moderate injuries and was transported to Rhode Island Hospital. The front seat passenger of the Toyota suffered serious/life-threatening injuries and was transported from the scene to Day Kimball Hospital in Putnam, Connecticut before being Life Flighted to UMass Medical Center in Worcester, MA. The other involved operators were not injured.

Casey was transported to Rhode Island Hospital, treated for minor injuries and released. He was transported to Rhode Island State Police Headquarters, processed, and held overnight pending a morning arraignment on the charges of 1.Driving to Endanger Resulting in Serious Bodily Injury (felony), 2. Driving to Endanger Resulting in Bodily Injury (misdemeanor). He will also be presented as a probation violator on the original charge of Assault With Intent to Commit Burglary.

The incident remains under investigation and anyone with information is requested to contact State Police Headquarters at (401) 444-1000.