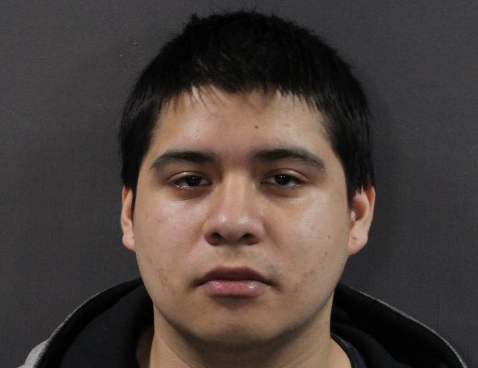 According to Detective Lieutenant Timothy Cook, Jr., at approximately 12:32 a.m., the Attleboro Police Department responded to a 911 call for an armed robbery with a handgun at the Cumberland Farms convenience store located at 290 County Street.

Upon arrival, officers were met by the store clerk, who provided a detailed description of the suspect. The suspect was reported to have brandished a firearm and threatened the clerk with it, before fleeing the store with an undetermined amount of cash.

The store clerk was found to be visibly frightened, but uninjured.

The clerk reported that he last saw the suspect fleeing on foot towards County Street. A perimeter was quickly established by patrol officers, along with troopers from the Massachusetts State Police. A state police K-9 unit also responded to the area to assist in the search for the suspect.

At approximately 1:16 a.m., the suspect was located as he attempted to exit a wooded area near the Attleboro High School on Rathbun Willard Drive. The suspect was then taken into custody without incident by Patrolmen Luke Harrington and Michael Antunes.

Upon being apprehended, it was learned that the suspect, 20-year-old Jose Oliva of Attleboro, had lost the firearm at some point in the wooded area while he was trying to evade police.

An extensive search of the area was conducted in order to locate the weapon.

At approximately 8:20 a.m., Attleboro Police Patrolman Noel Nieves and Attleboro Police Detective Keith Golden, with the assistance of a K-9 unit from the Massachusetts State Police, located the weapon in the wooded area between Bushee Street and Capron Park.

The weapon was found to be a pellet gun, identical in appearance to a semi-automatic pistol.

Oliva is being charged with armed robbery, and is being held without release at the Attleboro Police Department, until he is arraigned on Monday.