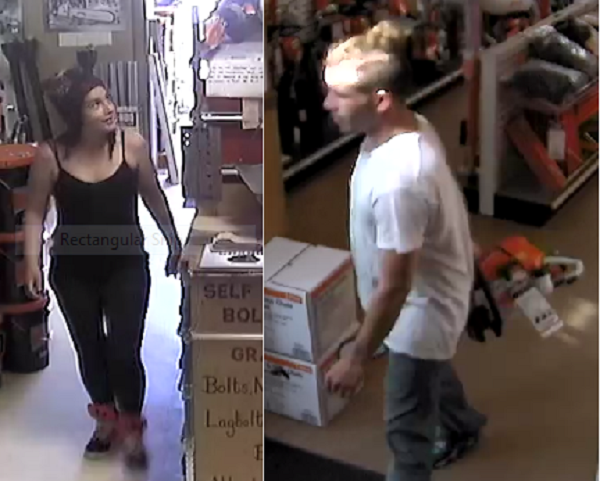 Hopkinton Police are looking for two suspects in a theft that injured an employee and at least one of them is local to our area.

On May 26 at approximately 9:30 a.m., members of the Hopkinton Police responded to RI Harvesting located at 15 Rte 184 Ext for a larceny after receiving a 911 call from the business.

Upon investigation it was determined a white male and white female entered the business and the male suspect stole a chainsaw valued at $1,889.00. The female and male party then exited the store and entered a 2018 silver Nissan Murano bearing RI registration WO-620 with the male operating. A store employee exited the business and attempted to stop the suspects from leaving and managed to open the driver’s side door. The male suspect quickly backed up the vehicle which resulted in the employee falling to the ground and receiving injuries to his hand, wrist, leg and knee. The vehicle then exited the parking lot heading south on Rte 184 ext towards Connecticut.

The vehicle was found to be stolen and was entered by North Kingstown PD as stolen on May 20. The male suspect was identified as 26 year-old Jonathan Ilarraza of North Kingstown. Hopkinton Police currently has a warrant for Ilarraza for Felony Shoplifting and Assault with a Deadly Weapon. He is also wanted by North Kingstown PD for Domestic Breaking and Entering, warrants are also pending from Rhode Island State Police for receiving stolen goods.