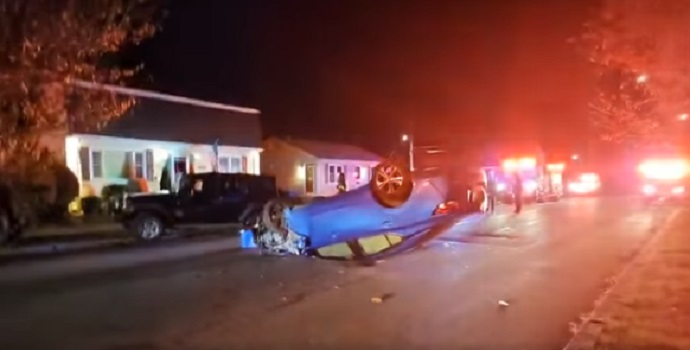 A Fall River driver was cited after an early morning rollover crash on Monday.

According to Sgt. Moses Pereira, just after 1:45 a.m., Officers responded to the 1800 block of Highland Avenue in response to an automobile accident.

Upon arrival, officers discovered that a Nissan sedan operated by a 30-year-old Fall River resident had turned onto Highland Avenue from Robeson Street at a high rate of speed. As a result, the operator over-corrected and struck a parked vehicle.

The collision caused the Nissan to roll over onto its roof.

The operator was able to exit the vehicle on their own power prior to the arrival of police.

The operator would later be transported to St. Luke’s Hospital in New Bedford for medical evaluation.

The driver was cited for operating at a speed greater than reasonable.

Both vehicles were towed from the scene due to damage sustained in the accident.