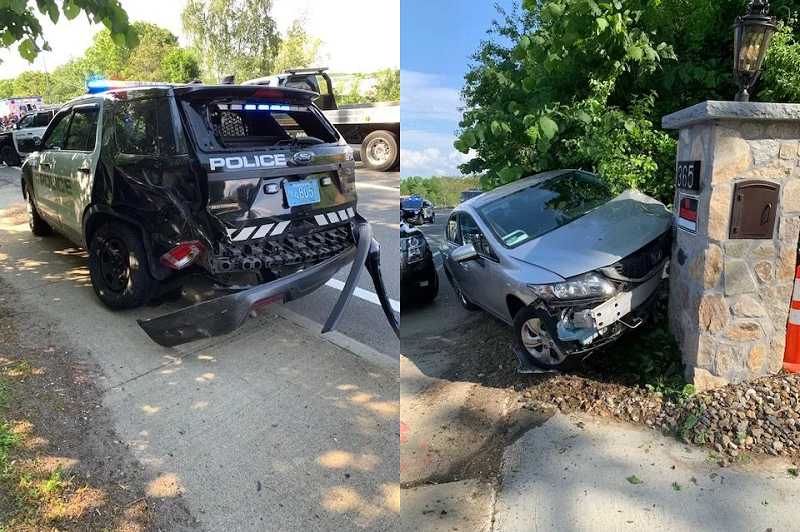 BRAINTREE — Chief Mark Dubois reports that a man was arrested and charged after he intentionally accelerated at officers that were trying to initiate a traffic stop and struck a cruiser, injuring one officer Wednesday afternoon.

Officers pursued Venezia in an attempt to stop him. As he continued up Granite Street, Venezia approached two Braintree Police cruisers that were traveling in the opposite direction with their emergency lights flashing.

As Venezia neared the oncoming police cruisers, he allegedly accelerated and crossed over into the southbound lane in order to intentionally strike the cruisers. Both officers driving attempted to take evasive action to avoid a serious collision and Venezia struck the rear driver’s side of one of the cruisers, causing the cruiser to spin out of control. Venezia lost control of his vehicle and struck a concrete pole in the area of 365 Granite St.

Venezia was quickly placed under arrest without further incident and was subsequently transported to a local hospital to be treated for his injuries and to undergo evaluation. In searching his belongings, officers located and seized two knives as evidence.

Venezia was hospitalized with injuries that are not believed to be life-threatening. He will be arraigned at a later date.

The officer struck by Venezia was treated at the scene with what are believed to be minor injuries.

“This was great work by our officers to not only avoid a collision that could have been much more serious, but to also shield anyone else from potentially coming into harm’s way,” Chief Dubois said. “We often don’t know what will happen when we put on this uniform everyday and thankfully our injured officer is going to be okay and no one else was hurt in this incident.”