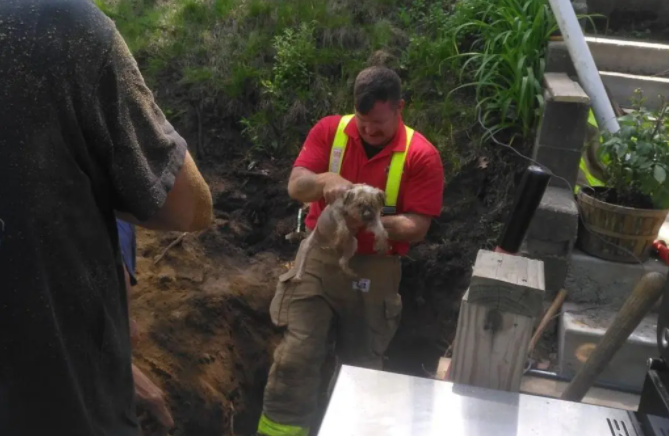 The Plymouth Fire Department helped rescue a trapped dog late last week who had accidentally fallen down a hole on the owner’s property.

According to the Plymouth Fire Department, at approximately 8:45 p.m. Thursday, crews from the West Plymouth Station responded to a home on Knight’s Point Road for the report of a trapped dog. Upon arrival, crews found a small Yorkshire terrier had made its way into an animal burrow below the deck and concrete stairs of the home.

The stairs were set into the side of a hill, and the burrow had a three to four foot tunnel entrance that led to a large cavity.

Firefighters got to work and were able to open the tunnel up by hand digging into the hill under the stairs, and then used a broom handle to open the rest of the way up before hitting a concrete wall on one side. PFD stated that the dog could be heard making small noises inside.

The dog’s owners put treats at the opening of the hole in the hopes that the dog would come out on its own. It began getting dark and crews did not want to continue digging out of fear of accidentally injuring the dog.

Crews returned to the area at approximately 10 a.m. the following morning, and could still hear the dog making noise. With assistance from bystanders the entrance to the burrow was secured and crews dug further, eventually finding the dog and pulling him out.

“We’re glad this rescue had a happy ending and the dog was returned safely to its owners,” Chief G. Edward Bradley said.

The dog, named Brownie, was taken to the vet as a precaution and is reportedly doing well.