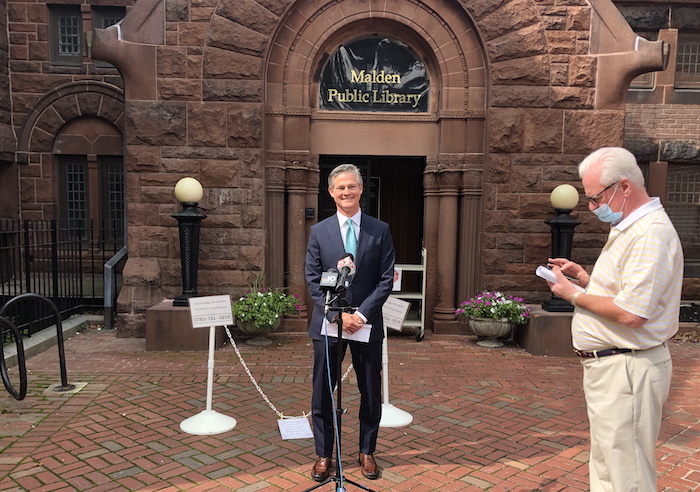 Republican Senate candidate Kevin O’Connor challenged U.S. Sen. Edward Markey on Monday to debate him seven times between now and the Nov. 3 election, describing himself as a “common sense candidate” who would even be willing to make one of those debates a full-hour focused on Markey’s signature issue — climate change.

But Markey, who is fresh off an intense Democratic primary contest win over U.S. Rep. Joseph Kennedy III, has agreed to only one debate early next month, and his campaign does not appear to be wavering in its position that one meetup will be enough for voters to see the differences between the two candidates.

O’Connor made his pitch outside the Malden Public Library where Markey held a victory party in his hometown the night of the primary.

The Republican attributed Markey’s win over Kennedy, in part, to the senator’s ability to talk to voters over the course of seven Democratic primary debates, and said he deserves the same opportunity.

“Senator Markey and I, as everyone knows, have substantive disagreements and we live at a time of crisis. We deserve from our leaders, at a minimum, transparency and responsible dialogue. Senator Markey has that opportunity in this election and he has that obligation to the people of Massachusetts and the taxpayers of Massachusetts,” O’Connor said.

“Is he afraid of me. Why is he avoiding debates?” O’Connor asked.

O’Connor also won a primary on Sept. 1, defeating Republican Shiva Ayyadurai, but the two Republicans did not debate once during their race. O’Connor’s campaign said Ayyadurai did not respond to requests to discuss debates.

Markey’s campaign on Friday agreed to one, hour-long debate next month hosted by the public radio and television station GBH and moderated by Jim Braude and Margery Eagan. The senator’s campaign manager John Walsh called it the “final” debate of the election, stating that Markey “always debates his opponents.”

“The GBH debate — to be simulcast on PBS and NPR outlets across the state — will highlight the stark differences between Senator Markey and Republican Kevin O’Connor, who strongly supports Donald Trump and also denies the urgent need for a Green New Deal to save our planet,” Walsh said on Friday. “After participating in seven high-profile debates during which he discussed his record of leading and delivering for the people of Massachusetts, Senator Markey looks forward to this final debate of the race with his Republican opponent.”

While Markey debated Kennedy seven times over 11 months, staging the same number of debates before Nov. 3 would mean putting Markey and O’Connor on stage together at least once a week, beginning this week.

Markey had no campaign events on his schedule Monday, and aides said he was returning to Washington, D.C. where the Senate was in session.

“Senator Ed Markey is looking forward to having a substantive debate with Kevin O’Connor on October 5,” campaign spokeswoman Liz Vlock said in statement, not elaborating on the reasons for only one debate.

O’Connor’s campaign said that before Friday it was in discussions with multiple other outlets in different parts of the state about additional debates.

The Boston Herald, Lowell, Sun, and Fitchburg Sentinel and Enterprise were interested in hosting one event, according to campaign officials, and a Boston consortium that included UMass Boston, The Boston Globe, WBUR and WCVB had expressed interest in hosting a debate on Oct. 27, a week before the election.

O’Connor said he would be happy to make one of the seven debates exclusively about the Green New Deal, a Congressional resolution sponsored by Ocasio-Cortez and Markey laying out a sweeping approach to fighting climate change. His co-sponsored of the Green New Deal became a rallying point for young progressive activists in the primary against Kennedy.

“I agree that our environment and a safe climate is absolutely critical and I will give him free media on his biggest issue and will demonstrate to the people of Massachusetts that that plan is not a plan. It’s a terrible idea that would involve massive tax increases,” O’Connor said.

Debates, however, would also give O’Connor exposure to voters that he might not be able to pay for otherwise. While Markey reported spending more than $10.6 million to defeat Kennedy and still had $3.5 million in the bank through mid-August, O’Connor has raised just $406,951 since he started running, and had only $125,757 left entering the final weeks of the primary campaign.

Markey campaigned in Boston and New Bedford over the weekend where he talked about his opposition to offshore drilling in the Atlantic, and the need for the Green New Deal. He also met with community health leaders to discuss funding requests for the next coronavirus stimulus package that has stalled in Congress.

O’Connor, who is a lawyer and lives in Dover, also tried to differentiate himself from the incumbent by accusing Markey of wanting to “defund” the police. Markey has said he supports reallocating money for law enforcement, and on Monday Tweeted about the ongoing protests against police brutality and racism in Portland, Ore.

“Portland police routinely attack peaceful protestors with brute force. We must disarm these officers, and every other police department in America, of weapons of war, and enact a nationwide ban on tear gas, rubber and plastic bullets, and bean bag rounds,” Markey said.

O’Connor said Markey’s refusal to debate him more than once on issues like climate change and policing makes him “unworthy of his position” in the Senate.

“Senator Markey is for the looters and shooters. I’m for our cops. I’m for law enforcement and safety,” O’Connor said.

O’Connor said he hasn’t always been a Republican, but couldn’t remember the specifics of when he joined the party. “I don’t remember the exact year. It wasn’t in connection with this, I can assure you of that,” he told reporters.

He did say on Monday said he would be voting for Trump in November, unlike Gov. Charlie Baker who supported O’Connor in the GOP primary.

“The Democratic Party has gone from the party of JFK to the party of AOC,” O’Connor said, referring for former President John F. Kennedy and New York Congresswoman Alexandria Ocasio-Cortez. “I completely, fundamentally disagree with the current mindset of the Democratic Party. The Republican party is for liberty, for a strong America, for safe communities and good jobs and that’s where I stand.”

Baker has called O’Connor a “terrific lawyer” who knows a lot about the local government and state issues that the governor prioritizes. “I think he’s the best candidate,” Baker said.