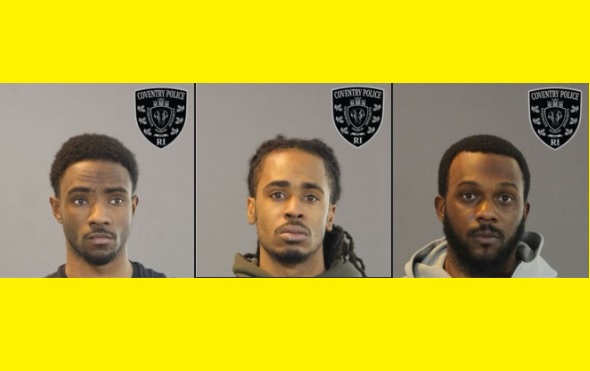 Three men from out-of-state are being accused of going on shopping sprees with fake money at multiple locations.

According to police, on Friday just after 2:30 p.m., Coventry Police Officers responded to Centre of New England Blvd., Coventry, RI for the report of suspected counterfeit bills being passed at Walmart.

As patrol officers were responding to the area, information was relayed that two involved male suspects had fled the store and left in a vehicle, driven by a third. Responding officers intercepted the vehicle and conducted a motor vehicle stop on New London Tpke.

After an on-scene investigation determined the three men were allegedly engaged in fraudulent activity, they were taken into custody and transported to Coventry Police Headquarters. 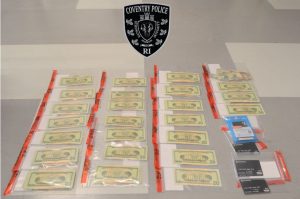 Subsequent investigation and searches by officers and detectives led to the recovery of one-hundred-ninety-five counterfeit twenty-dollar bills from the three suspects. Additional evidence obtained indicated the suspects allegedly committed similar acts in at least the Town of East Greenwich, just prior to arriving in Coventry; as well as in Virginia, days before that.

Markquise Robinson, 22 years-old, and Davon Turbe, 28 years-old, both from Brooklyn, NY, and Kevon Ferrell, 30 years-old, of Hartford, CT, were each charged with Possession of Counterfeit Bill or Note and Conspiracy and held overnight.

Robinson, Turbe, and Ferrell were arraigned by a Bail Commissioner at Coventry Police Headquarters on Saturday and subsequently transported to the Adult Correctional Institution, with a re-arraignment date on Monday. After appearing before a 3rd District Court Judge, bail was set for each at $10,000 with surety.