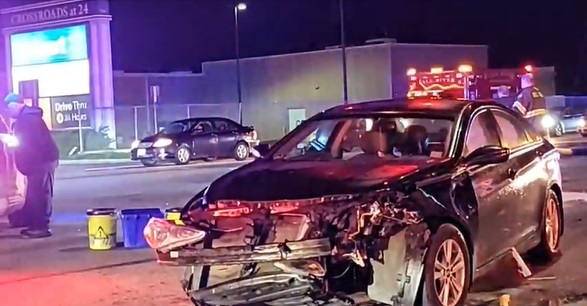 One driver was cited, another driver was arrested, and several people were injured including an officer after a multivehicle crash led to a second crash in Fall River.

According to Sergeant Moses Pereira, at approximately 10:00 p.m., Officers responded to the intersection of Brayton Avenue and Stevens Street, in response to a motor vehicle collision. Once on scene, officers learned that the operator of a Nissan failed to yield to a red light while traveling east on Brayton Avenue striking a Hyundai which was entering the intersection on a green traffic signal. Both operators were transported to Charlton Memorial Hospital with minor injuries. The operator of the Nissan was cited for failure to yield at the traffic signal.

During his response to the accident, Officer Joseph Bailey’s parked police vehicle was struck by a passerby while his emergency lights were activated. Officer Bailey, who was seated in the driver’s seat at the time of the collision, sustained an injury and was transported to Saint Anne’s Hospital for evaluation.

Children could be seen inside the vehicle that hit Officer Bailey.

Sgt. Gary Barboza conducted an investigation relative to the collision with Officer Bailey’s parked police vehicle. It was determined that the operator, Christine Barbosa, 46, of Fall River was impaired at the time of the collision. She was arrested and charged with OUI-Liquor, Negligent Operation of a Motor Vehicle, and Reckless endangerment of a child.