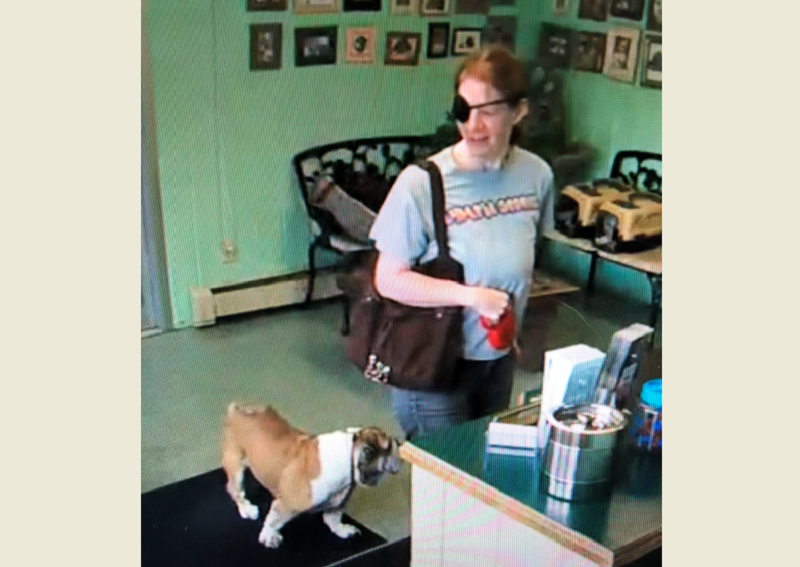 The MSPCA is looking for the public’s help to identify the owner of an abandoned and ill dog.

On August 23rd, a woman brought an older, male English Bulldog to the Sweet Garden Pet Resort in East Bridgewater, Mass. for grooming. But she never came back to collect the dog, which was suffering from pressure sores and ear infections and has been at Sweet Garden since he was abandoned. The Long Island Bulldog Rescue group has agreed to take in the dog after his stray hold expires this Thursday.

The woman is described as mid-40s, Caucasian, with long red hair pulled back in a ponytail. She is about 5’6” in height and was wearing a gray t-shirt and blue jeans and had an eye patch over her right eye. She listed her name as “Melanie Wichester” but that name was later run through the East Bridgewater police database and it proved to be made up. The name she listed for the dog was “William Katz”

Here is a link to CCTV video footage of the woman in the shop: https://www.youtube.com/embed/bmFoPNL4Ouc

The dog will likely need surgery to help heal his recurrent ear infections and to alleviate his pain. The Long Island Bulldog Rescue group will assume responsibility for his care and later place him for adoption.

Anyone with information that may lead the MSPCA to identify the woman who abandoned the dog is urged to call the MSPCA’s toll-free Law Enforcement line at 800-628-5808. Animal abandonment is a felony crime in Massachusetts punishable by up to seven years in prison and a fine of up to $5,000.