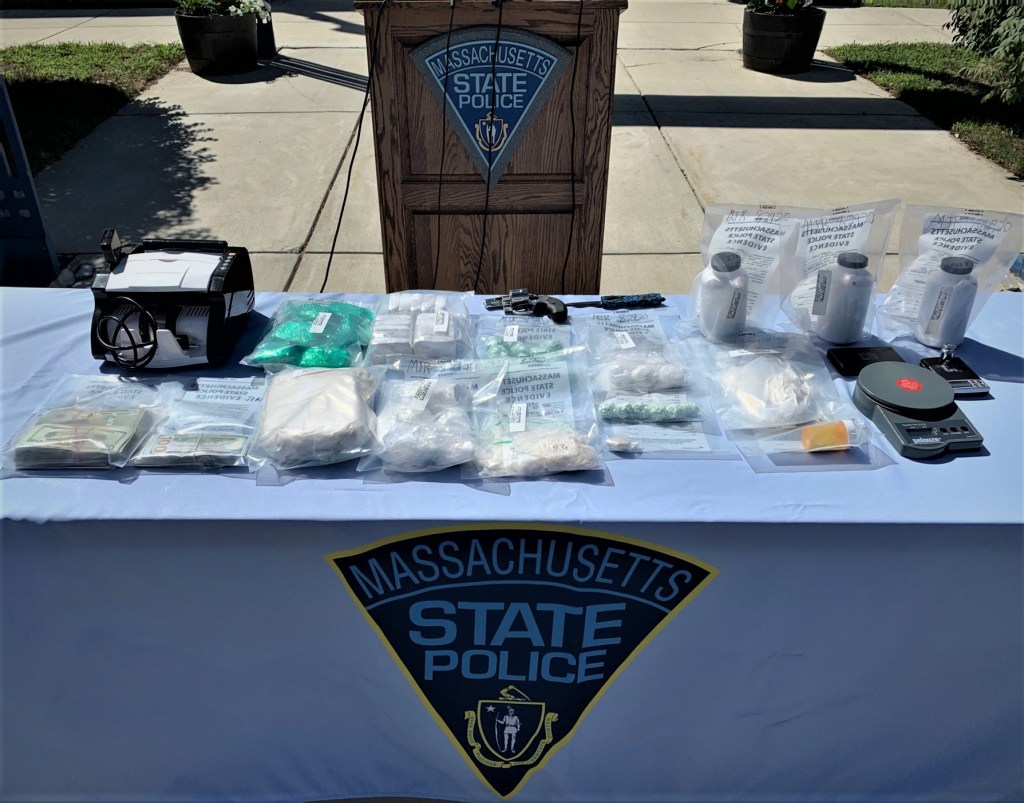 In a less than two-day period late last week, Massachusetts State Police narcotics and gang interdiction Troopers and MSP’s federal and local law enforcement partners in a joint task force dealt severe blows to two highly organized, high-volume drug trafficking organizations operating out of the Merrimack Valley, as well as to a Fall River-based street level drug operation supplied by one of the DTOs. The combined operations seized approximately 6 1/2 kilograms of suspected fentanyl, numerous pills, and a firearm, and resulted in several arrests, all in less than 48 hours.

According to Massachusetts State Police, the most recent of the three operations began Friday, August 28, when, as a result of a successful joint investigation in southeastern Massachusetts the previous day, the South unit of the Massachusetts State Police Commonwealth Interstate Narcotics Reduction and Enforcement Team — a task force comprised of State Troopers, East Bridgewater Police and Brockton Police Officers, and agents from the federal Homeland Security Investigations Department — along with MSP Gang Unit Troopers, developed information about a fentanyl Drug Trafficking Organization (DTO) operating out of Methuen.

Investigators arranged for the delivery of heroin by this Methuen DTO to a location in Boston. Commonwealth Interstate Narcotics Reduction and Enforcement-South Unit members (CINRET) and MSP Gang Unit Troopers established surveillance of the target location in Methuen.

At approximately 3:00 p.m. Friday, team members observed a female member of the Methuen DTO exit the residence, enter a vehicle with a backpack and leave the area. A second woman was operating the vehicle. Team members surveilled the vehicle from the target residence in Methuen to Route 93 south in Boston where marked State Police cruisers from the State Police-Medford Barracks and the MSP Troop H Community Action Team conducted a motor vehicle stop. The uniformed Troopers located nearly 2 kilograms (1,836 grams) of fentanyl in the vehicle. Troopers arrested the two female suspects — Isadora Castro, 29, and Kaylin Guillermo, 33 — for drug trafficking and transported them to the State Police-South Boston Barracks for booking.

Meanwhile, surveillance remained in place on the residence in Methuen during the arrests. Investigators observed the main target of the DTO, Anthony Levine, 30, exit the residence and secrete suspected evidence in a motor vehicle in the parking lot. At this point Levine was temporarily detained as the investigation progressed. The residence, an apartment at 142 Pleasant Valley St., building 70, in Methuen, was then frozen pending search warrants for both the residence and target vehicle.

At approximately 1:20 a.m. on Saturday morning, the team executed search warrants for the target residence and motor vehicle. As a result of the warrants, the following narcotics were seized:

Also located during the search warrant was approximately $8,129 in US currency, which was also secured as evidence as suspected proceeds of illicit narcotics sales.

The main target in the DTO, Anthony Levine, 30, was allowed to leave the residence prior to the execution of the search warrant — because of the length of time it took to secure the warrant — and will be arrested on a warrant. Levine wears a court-ordered monitoring bracket as a result of prior involvement in the criminal justice system.

The arrests and seizure of the nearly 4 kilos of deadly opioids on Friday afternoon and early Saturday morning followed two other operations by the CINRET South unit that resulted in the seizure of an additional approximately 2.5 kilograms of suspected fentanyl and the arrest of a Lawrence-based supplier on Thursday.

That MSP CINRET investigation, which was assisted by the State Police Gang Unit and members of the Southeastern Massachusetts Gang Task Force, initially targeted the distribution of fentanyl and cocaine by two suspects in Fall River. That investigation, which included a series of controlled purchases of fentanyl from the two targets, allowed Troopers to obtain search warrants for an apartment in Fall River and two vehicles.

On the morning of Thursday, Aug. 27, the CINRET South unit MSP Gang Unit, and MSP Troop D Community Action Team, along with Fall River Police Gang Unit Officers, established surveillance of the 78 Liberty St. apartment. Shortly before 9 AM surveillance teams observed two individuals leave the apartment and drive away. Investigators followed and stopped their car in Fall River. A search warrant executed on the car led to the recovery of a backpack containing approximately $11,600 in US currency, secured as evidence as the suspected proceeds of narcotics trafficking.

Investigators then returned to the apartment and executed a search warrant, leading to the seizure of a digital scale consistent with use for drug distribution, US currency, and documents establishing residency of the apartment.

The team also executed a search warrant on a Cadillac Escalade parked at the apartment. That search led to the seizure of the following:

8 bricks of suspected fentanyl wrapped in cellophane and weighing approximately 814 grams;
2 plastic baggies containing suspected fentanyl weighing approximately 97 grams and 44 grams;
A revolver and ammunition;
A pill bottle containing numerous light blue pills, stamped M30; and
A purse holding plastic baggies, a digital scale, and a knife.
During the execution of the search warrants, Troopers, Officers and Agents developed information identifying the Lawrence-based supplier of the narcotics seized in Fall River. CINRET and Gang Unit investigators were then able to arrange for a delivery of fentanyl by that supplier to a restaurant in Fall River on Thursday night.

The investigative team set up surveillance of the prearranged delivery location, an Applebee’s restaurant in Fall River.

At approximately 9:15 p.m. Thursday, surveillance teams observed the suspected supplier pull into the restaurant parking lot. Team members approached the SUV and placed the lone male occupant, Jose Baez-Lara, 32, of Lawrence, into custody. Troopers and Officers immediately located a gift bag on the front seat. Inside the gift bag was a shoe box that contained 15 block packages that contained suspected fentanyl. The suspected fentanyl weighed approximately 1,534 grams with packaging. Troopers transported Baez-Lara the State Police-Dartmouth Barracks, where he was booked on narcotics trafficking charges.

The two individuals at the initial Fall River motor vehicle stop will also face drug charges. Parts of that investigation are ongoing and no further information about them is being released at this time.

In all, from Thursday to the pre-dawn hours of Saturday morning, the MSP CINRET-South Troopers and their Brockton, East Bridgewater, and Homeland Security Investigations partners, the MSP Gang Unit, and MSP uniformed Troopers from Troops D, H, and A, CAT, worked tirelessly to take 6 ½ kilograms of Fentanyl and heroin out of the hands of drug traffickers, and to seize additional illegal narcotics, weapons, and approximately $13,000 of U.S. currency suspected to be the proceeds of drug trafficking.

Both alleged suppliers in the two separate Drug Trafficking Organizations — Baez-Lara in Lawrence and Levine in Methuen — were highly-organized, multiple-kilogram level opioid distributors, according to police. When CINRET and Gang Unit members arranged deliveries of narcotics, both targets were able to put together the requests and move large quantities of the product in a few hours, which leads investigators to believe they either had large quantities of fentanyl on hand or easily within access.

Intelligence developed by the CINRET-South Unit suggests that both BAEZ-LARA and LEVINE have been supplying fentanyl and heroin to street level dealers for more than a year, at least.

The dedication, teamwork and effort is a credit to all the partner agencies involved.

The Massachusetts State Police operate three CINRET regional units as part of the Department’s overall narcotics interdiction mission. Each CINRET unit — one each in the southeastern, northern, and western parts of the state — is comprised of MSP Troopers and local police and HSI partners. Below are year-to-date enforcement statistics from these three highly active narcotics task forces.