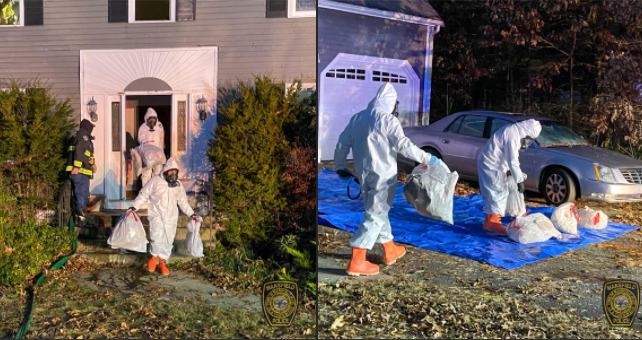 According to Dave Procopio of Massachusetts State Police, at 1:48 a.m. today the Mansfield Fire Department responded to a house fire at 48 Stearns Avenue. Upon arrival, firefighters determined that all occupants were out of the house uninjured and quickly knocked down the fire in a second-floor bedroom.

During the subsequent investigation a Mansfield Fire investigator located chemicals at the scene prompting the response of Mansfield Police, Massachusetts Hazardous Materials Team, and the Massachusetts State Police Bomb Squad and Clandestine Lab Team assigned to the Office of the State Fire Marshal.

Taking appropriate steps to ensure the safety of the neighborhood and their own safety, investigators processed the scene, collected evidence, and rendered it safe. The investigation by the Mansfield Police and Fire and State Police is ongoing, but evidence gathered at this time suggests the chemicals and related items in the home were being used to manufacture methamphetamine.

Officials are releasing no further information at this time.