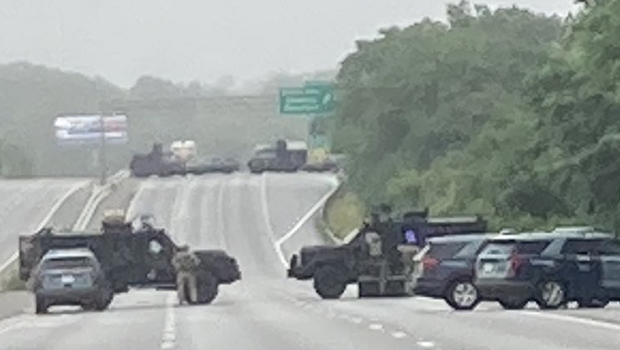 Authorities have issued an update, including those who have been arrested, on the standoff that led to 11 arrests and shutdown a part of Route 95 on Saturday morning.

According to Dave Procopio of the MSP, the ongoing investigation by Massachusetts State Police detectives assigned to the Middlesex District Attorney’s Office, the State Police Crime Scene Services Section and State Police Troop A has determined that all 11 men arrested Saturday in Wakefield refer to themselves as a militia and state that they adhere to “Moorish Sovereign Ideology.”

Procopio stated that the group claimed that it was traveling from Rhode Island to Maine to conduct what it refers to as “training.” None of the men, who were dressed in military fatigues and body armor and were armed with long guns and pistols, has a license to carry firearms. Troopers have recovered eight firearms thus far: three AR-15 rifles; two pistols; a bolt-action rifle; a shotgun; and a short barrel rifle.

Early Saturday morning, MSP were on scene for an ongoing situation involving several armed persons on Route 95 in Wakefield. Route 95 was shutdown between Lynnfield and Stoneham.

Residents of Wakefield and Reading were asked to shelter in place while the standoff occurred between police and the group. The incident lasted from early to late morning.

In a video posted to social media, the group stated that they are not anti-police or anti-government.

The defendants are identified as follows:

Additionally, Hernandez, Johnson, Dow, and the juvenile male are charged with furnishing a false name to police.

Additional charges are possible if the ongoing investigation, including the expected search of the defendants’ two vehicles, determines they are warranted.

The juvenile defendant will be released to parental custody. The remaining adults will each be held at the Billerica House of Correction on $100,000 cash bail. They will be arraigned next week in Malden District Court.