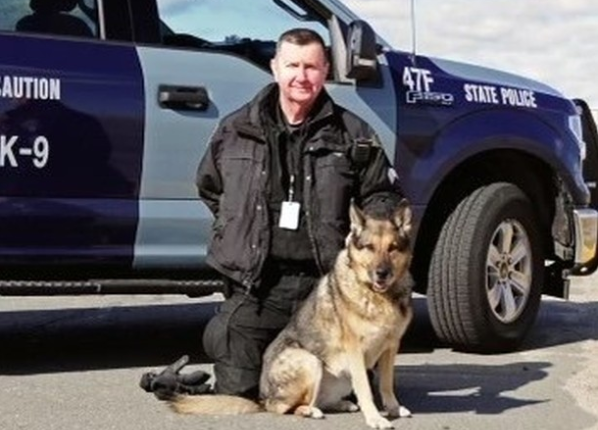 A 13-year-old German Shepherd, Maura was a member of the State Police Bomb Squad assigned to the Fire Marshal’s Office along with her partner, Sgt. Neil Calnan, according to MSP.

“Maura served the citizens of our state and beyond with exemplary dedication, courage, and loyalty for 12 years. Her primary mission was helping protect the hundreds of millions of travelers who passed through Logan Airport during her long service there.”

Maura also worked to maximize the public’s safety at many specialized security operations throughout Massachusetts across the years. On the afternoon of April 15, 2013, Sgt. Calnan and Maura were dispatched to Boston to help secure the Marathon bombing scene.

In a statement, it is clear that the MSP think highly of Maura.

“Maura’s exceptional dedication and work ethic were noted and admired by all who worked with her. Maura recently developed a serious medical problem. She crossed the Rainbow Bridge yesterday. She was a great dog, a loyal partner, and a beloved member of the Massachusetts State Police and Calnan families. Thank you for your service Maura. Only green fields to run, now, and play time and peace always.”