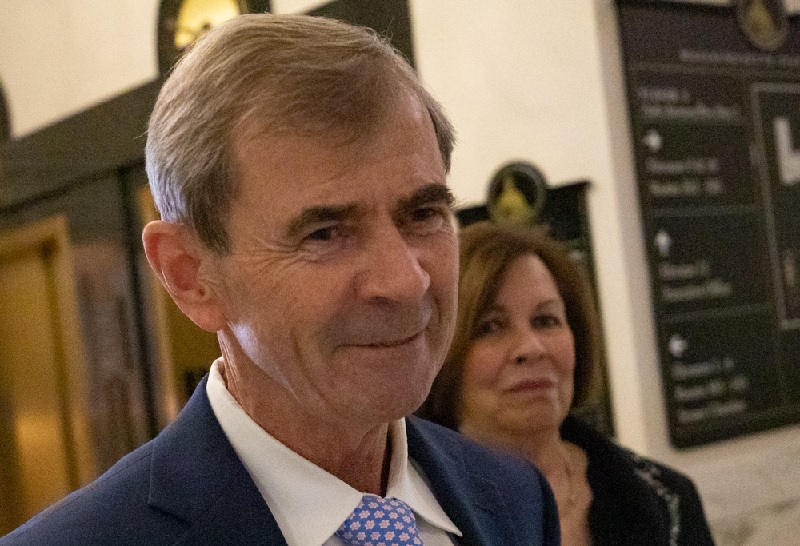 Secretary William Galvin bears a smile as he emerges from the governor's office with his wife, Eileen (right), after being sworn in to an eighth term Wednesday. [Sam Doran/SHNS]

Less on his mind, however, was the weight of that history.

First inaugurated as secretary in 1995, Galvin’s newest four-year term will take him well beyond former Secretary Frederic Cook’s record of 28 years holding the post. As he walked out of Gov. Maura Healey’s office after being inaugurated in a private ceremony with only his wife, Eileen, and Lt. Gov. Kim Driscoll in attendance, reporters asked the Brighton Democrat if that achievement brought any new meaning to an oath of office he had taken seven times before.

“Not really,” he replied. “As you know, most of my predecessors served for a long time as well.”

Galvin pivoted right away to the topic of domestic violence, where he said “a certain urgency has been added” by a series of recent high-profile incidents including the alleged murder of Cohasset’s Ana Walshe by her husband, Brian.

Galvin referenced an event he hosted in December alongside district attorneys, where he highlighted a program the secretary’s office runs to help survivors of domestic violence, sexual assault and stalking relocate and make their addresses confidential.

“None of us could have conceived all of what’s happened since, not just the Walshe case but so many other instances,” Galvin said. “Expanding those programs and perhaps getting into other aspects of it — clearly what we do, what we’ve done successfully, is relocate people who have made the decision to escape their abusers — but I think there’s a big problem here.”

“I think we have to do a lot more. We just can’t attack it as a ho-hum, ‘well, it’s a part of life’ situation,” he added. “That’s certainly a priority for me in the new term.”

A 16-year veteran of the House before he ran for secretary, Galvin has been one of the most consistent figures on Beacon Hill for nearly half a century and has overseen the state’s elections administration, lobbyist and corporation registration, and public records law compliance since the Clinton administration.

He has fended off both primary and general election challengers along the way, never earning less than 64 percent of the vote in a reelection campaign. Over the course of Galvin’s tenure, the House has churned through five speakers, seven Senate presidents have wielded the gavel, and another seven people have executed the duties of governor.

What, then, could Galvin hope to achieve in his eighth term that he has not in the seven before now?

“Civic education,” he answered. “One of the things we’re seeing is that there’s [a] need for better civic education, especially in high schools, of what the significance of elections are. I mean, I think the root cause of some of the election denialism and some of the other hostility that’s out there is people don’t really understand what government is supposed to do.”

Galvin said Wednesday he believes educating young Bay Staters about how government works “is something we should be beginning sooner.”

A pair of state representative races decided by microscopic margins following recounts thrust debate over election integrity back into the spotlight on Beacon Hill. Both Republicans who lost the recounts challenged the results, alleging irregularities but not fraud, and some Democrats bristled at the House’s move to temporarily delay inauguration of the two winners until a special committee reviews the situation and declares winners.

That panel on Tuesday night declared Democrat Margaret Scarsdale of Pepperell victorious over Republican Andrew Shepherd of Townsend following her seven-vote certified win, in the process flagging missteps that committee members said “highlight the need for continued close review of current regulations, training, policies and practices of elections in the Commonwealth.”

“We certainly take administrative action to say, ‘This is what you’ve got to do.’ But you also have to remember we have 351 cities and towns, different-sized clerks’ offices, different levels of experience,” Galvin said when asked about the committee’s findings. “We do send people out there all the time. We try to help them and see what we can do, but you’re always going to be challenged when you have thousands of people participating as workers in an election every general election. You have to make sure that they understand what they’re doing and encourage them to do it correctly.”

But negotiators dropped from the final bill a Senate-approved measure allowing new voters to register and then cast their ballot on the same day.

Galvin, who included that change in his own recommended election reforms, said he views same-day registration as unfinished business.

“Whether we actually get that, I don’t know. That was the biggest sticking point last time,” Galvin said. “We’re going to refile it and hope it happens, and we think we can do a good job at it.”

In August, Galvin told the Boston Globe that a victory in his reelection bid would mean “quite likely, I will not run again.”

On Wednesday, he would not say if he planned to step down come 2026. Asked if the morning’s oath of office was the final one he would take, Galvin replied, “I’m working on this one.”