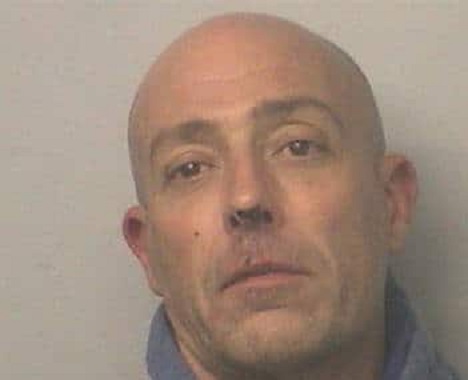 Chief James McIntyre reports that the Stoneham Police Department arrested a man that allegedly crashed his vehicle and broke into a liquor store on Saturday and charged him with assaulting officers trying to detain him.

On Saturday, Jan. 8, at approximately 1:05 a.m., Stoneham Police were dispatched to Rapid Liquors, located at 171 Main St. for a report of a triggered burglary alarm.

Upon arrival, officers located a vehicle that had crashed into the doorway of the store. Officers entered the doorway and observed the suspect — later identified as 54-year-old John Bacigalupo of Revere — inside the business near the cash registers smoking a cigar, drinking a beer and eating potato chips.

In an attempt to de-escalate the situation, two officers deployed their TASER brand electronic control weapon three times, however, it had no effect on Bacigalupo. Officers attempted to take Bacigalupo into custody and a struggle ensued. At one point, Bacigalupo allegedly struck an officer in the face and merchandise fell from the shelves. Eventually, officers were able to place Bacigalupo under arrest.

Bacigalupo refused medical treatment and was transported to the Stoneham Police Station where he was booked.

“I wish to commend the three Stoneham Police Officers for apprehending a dangerous suspect who was willing to use violence against officers to resist arrest. The officers exercised great restraint, using their training and experience to attempt to de-escalate a volatile situation. I am grateful that this situation was ultimately brought to an end without serious injury to either the suspect or responding officers,” Chief McIntyre said.

Bacigalupo is being held on $100,000 bail and is expected to be arraigned Monday at Woburn District Court.

This incident remains under investigation by the Stoneham Police Department.