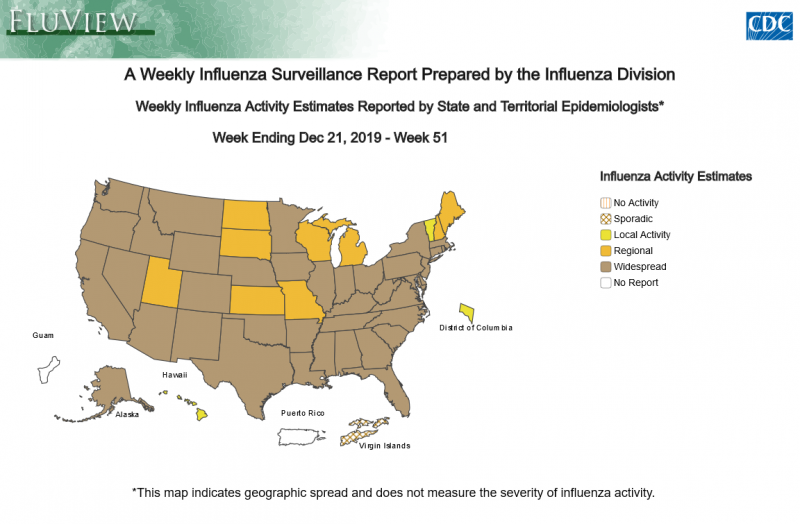 The CDC is warning that influenza-like illness activity in Massachusetts is increasing.

According to the December 27th weekly flu report, overall influenza-like illness activity for Massachusetts has increased from low to moderate this week.

Influenza-like illness (ILI) is defined as fever above 100F in addition to either cough and/or sore throat. Many more people are infected with influenza than are tested for influenza. ILI is used throughout the regular influenza season as a way to help track influenza activity in individuals who are not tested, as trends in ILI have been shown to mirror influenza trends. Seventy-nine healthcare facilities called ‘sentinel sites’ report the number of patients they see with ILI each week during regular flu season. Sentinel sites include provider offices, school health services, community health centers, urgent care centers, and emergency departments across Massachusetts.

Some good news in the report is the percent of influenza-associated hospitalizations in Massachusetts is lower than the previous two years in the same week.

The MDPH states that in the 2019-2020 flu season, more influenza B than influenza A positive specimens have been reported by hospitals and outpatient facilities in Massachusetts.

Nationally, influenza illness activity is increasing and influenza B is most common.

According to the Massachusetts Department of Public Health, it’s not too late to get vaccinated and flu vaccination is always the best way to prevent flu and its potentially serious complications.