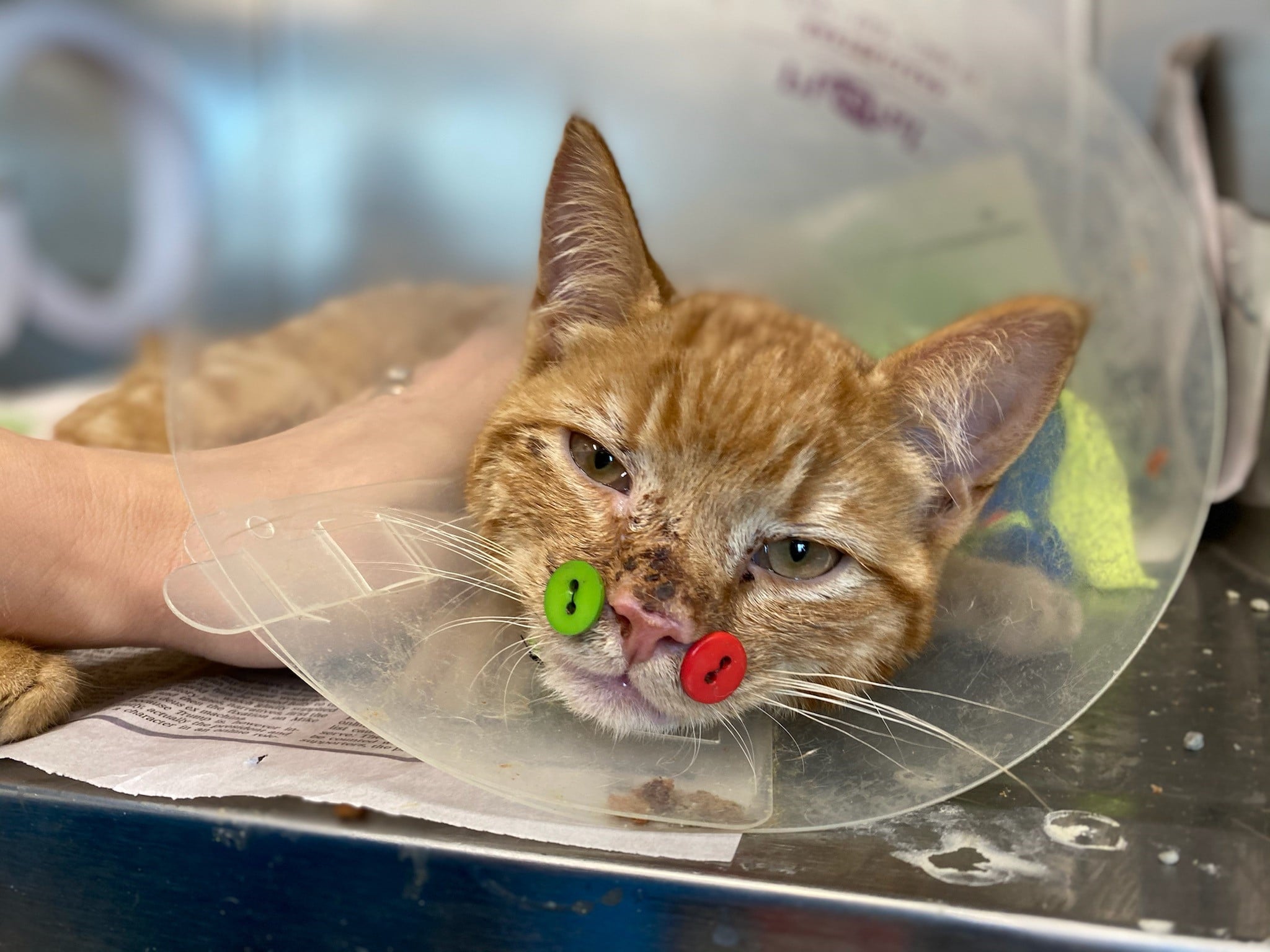 BOSTON, Feb. 9, 2021 – A seven-month-old cat that MSPCA-Angell staffers have named “Juicebox” is lucky to be alive after he was attacked by the resident dog at his Boston-area home on Jan. 20th and rushed to Angell Animal Medical Center by his family just after.

Angell’s emergency veterinarians treated the adorable orange cat for pain and head trauma, and diagnosed serious facial injuries: multiple jaw fractures, lacerations and damage to the palate in the roof of his mouth.

Juicebox underwent surgery to repair the fractures and, in what veterinarians describe as a novel but highly effective approach, he now has four plastic buttons on his face—two on his cheeks and two below his chin—to hold sutures in place and stabilize his jaw so that healing can take place. Juicebox is expected to “wear” his buttons for another four to six weeks, after which time they will be removed completely.

Juicebox’s former family made the difficult decision to surrender their cat to the MSPCA so that he can be placed in a new home, free of dogs. MSPCA staffers are quick to point out, however, that what makes the young cat so special is not just how he looks, but his adorable and playful personality.

“He has obviously been through and survived a serious trauma, but he has adapted quickly to the sutures that limit the use of his jaw and, through it all, he’s remained an outgoing, playful and really friendly cat,” said Victoria Odynsky, manager at the MSPCA’s Boston adoption center. “We are relieved that we are able to provide urgent medical care for him, and we’re glad to see him recovering so well.”

Juicebox has been placed in a foster home with an MSPCA volunteer who can manage his ongoing medical needs, and provide loads of TLC while he recovers. He’ll return to the MSPCA this Friday, Feb. 12 for x-rays and to assess his progress.

Juice Box’s medical care will exceed $2,000, and the MSPCA encourages anyone able to offset the cost of his care to donate at www.mspca.org/juicebox.

Juicebox will soon be ready for a permanent home, and the MSPCA expects many adopters to step forward.

Anyone interested in adopting Juicebox can inquire about his status by way of this form: www.mspca.org/bostonadoptioninquiry.