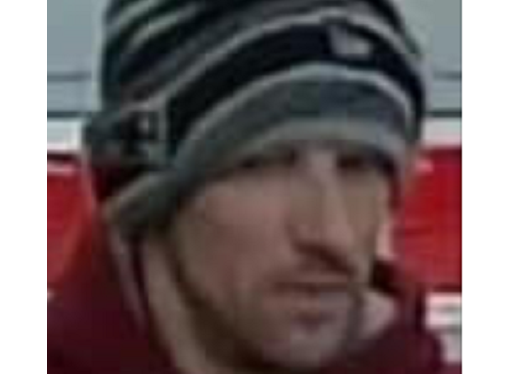 Adam Howard, 37, with a last known address out of New Hampshire, pleaded guilty on January 29, 2021 in Fall River superior Court to an indictment charging him with armed robbery. He was sentenced last week by Judge Sharon Donatelle to the state prison term.

On Thursday, January 13, 2020, at 12:28pm, Taunton Police were dispatched to Santander Bank at 188 Broadway for a robbery. The victim, a female bank teller, told police that a male with a short beard wearing a red sweatshirt and beanie type hat walked up to her station and handed her a hand written note. The note said “I have a gun keep calm 20’s, 50’s, 100’s. No dye packs no one gets hurt.” After reading the note, the victim looked at the suspect and the suspect said “I’m serious.” The victim then handed the suspect money from her drawer and the suspect exited the bank. The suspect fled with $755.

Surveillance video showed the suspect had a short scruffy beard and was wearing a red hooded sweatshirt and a black, gray and white striped winter hat with a pom pom on top. Police posted about the robbery on social media looking for the public’s assistance in identifying the suspect. Police received tips the suspect was this defendant, and learned he had been staying with a relative in Taunton.

The case was prosecuted by Assistant District Attorney Carolyn Morrissette.

“The defendant has a long history of committing crimes including a prior robbery conviction. He is a danger to the community and the public needs to be protected from him,” District Attorney Quinn said.