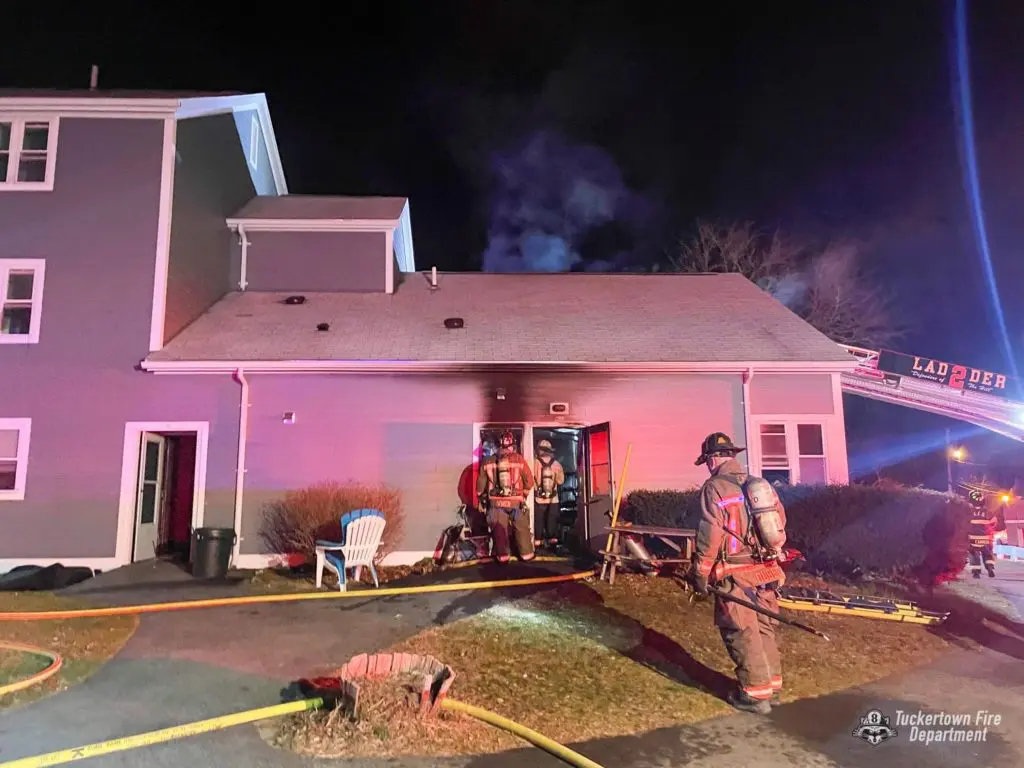 At approximately 12:50 a.m., the overnight duty engine and Stations 1, 2, 3, 6 and Ladder 2 responded to a commercial box alarm at the Champagne Heights housing complex located at 364 Curtis Corner Road.

Shortly after the initial dispatch, responding fire units were advised that someone may be trapped inside the unit where the working fire was located. The South Kingstown Police Department was first on the scene and had attempted to rescue the person.

Engine 21 was the first engine on scene and Chief 3 on scene reported fire showing from one of the units. Crews began a primary search and found a man unresponsive in the rear bedroom of the unit. The man was brought outside and was transported by ambulance to an area hospital. According to WPRI, the man is in critical condition. The man was the only resident inside the unit at the time of the fire.

Engine 21 crews then began working to extinguish the fire and establish water supply. Crews reentered the building to continue their search and located a dog in the unit. The dog was carried to safety outside and taken to a local veterinarian.

A second UFD alarm was called bringing Stations 4, 8 and 9 to the scene to provide support. Crews were able to contain the fire to one unit and the scene was cleared at approximately 4:50 a.m.

The cause of the fire remains under investigation by the State Fire Marshal.

While working the apartment fire, Stations 5, 7, 8 and the Kingston Fire District were dispatched to a commercial alarm at a local mill building. An additional eight UFD volunteer firefighters responded with three engines to the call. It was determined that there was no fire and a problem with the sprinklers had activated the box alarm.

“It is a testament to the UFD and the dedicated members that we were able to handle the initial fire and a box alarm simultaneously without requiring additional mutual aid from outside the town. I am proud of the work by our volunteers and the fact that we are able to provide exceptional service at very minimal cost to the taxpayers,” Chief Pinch said. “I’d also like to thank the South Kingstown Police Department, EMS and dispatch for their assistance and professionalism. All members of the town’s public safety team did an exceptional job this morning.”