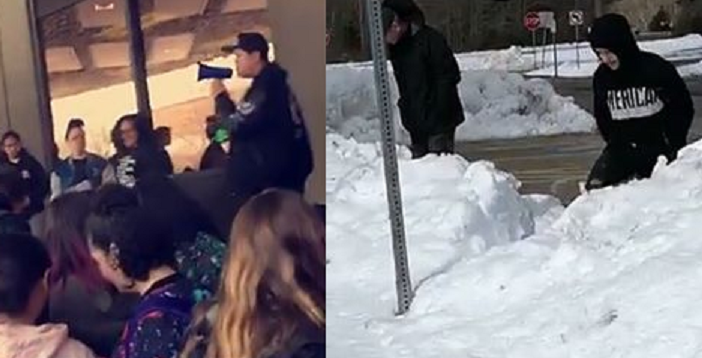 Local students walked out of class today for about twenty minutes in protest of gun violence in school and the Parkland Florida shooting. While some students at Durfee High took the protest seriously, others decided to play in the snow and make a joke of it according to some students. Mackenzie Hastie was so upset in fact, that we were sent an editorial on today’s incident.

“It is really very sad that people took the meaning of these walkouts all the wrong way. This was supposed to help us reflect on what happened in Florida and people took it as a joke and just a reason to leave school and play in the snow. You should have sat outside and listened to your peers and discussed what happened instead of disrespecting the protest and everything it stood for. This is why I have no respect for people anymore. You take things that are supposed to show support, and be a helping hand, and you made it about leaving school. People died, people lost their children, brothers, sisters, aunts, and uncles. Durfee High was the only school I’ve seen so far that had students speaking about the victims and students were throwing snowballs at them. It’s extremely disrespectful.”

“All of the schools that participated did it today, and we were out there for about 20 minutes, but nobody was listening to the students who were speaking about the victims. They were throwing snowballs and yelling over the students who were speaking. Me and my friend told more than a few kids to stop throwing snow and listen and be respectful.”
Related Topics:durfeegunparklandschoolsnowviolencewalk out